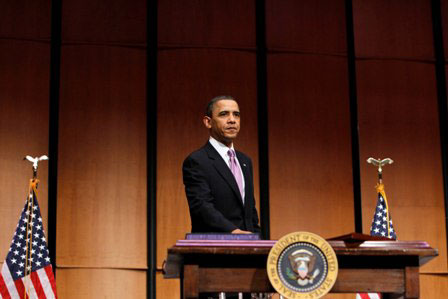 President Obama pulls out the chair to sit down to sign the Healthcare and Education Reconciliation Act of 2010. (Alex Brandon/AP)

In the Interest of Wellness: Can Nationalized Healthcare Really Work For All?

The ongoing discussions and protests surrounding health care reform have brought out many hidden agendas to the forefront of America’s societal framework.

Issues of race, gender, class, geography, physical limitations and age have been used towards proactive and destructive ends with buzz words including “nationalized healthcare” receiving rallying cries of support as well as tea party protests.

Those without healthcare resources welcome the opportunity to get treatment without all the current obstacles that block or limit access and those with healthcare benefits worry that the rates they currently struggle with will increase while services decline.  Opposing lines have been drawn deeply, misinformation is rampant and the long term implications are still unclear.

However, for many, the heart of a government-run program, thus the term nationalized healthcare, is not centered on a political shift in the country’s infrastructure, but a bird’s eye view on the raging disparities that have existed for decades.   Whether the true reform for healthcare is a national model or significant overhaul of the existing model, the issue of disparity and lack of access by many is the crux of the problem.

The 2003 National Healthcare Disparities Report (NHDR) provided significant information about the specific groups who stand to gain the most from a nationalized healthcare system because they have consistently fallen through the cracks of the current broken system or been disproportionately excluded.

Developed by the Agency for Healthcare Research and Quality (AHRQ), the report was the first national comprehensive report to measure differences in access and use of services by a diverse population.  The findings of the report outlined significant disparities beyond racial lines.

Highlighting the disparities that serve as the basis for a nationalized healthcare model requires a national report that systematically collects and analyses the healthcare data that goes beyond racial and ethnic lines and is inclusive of age, income, lifestyle and geography.  This broader report provided more effective guidelines to identify where the disparities are and to develop national initiatives to address them.

Other reports including the findings from Healthy People 2010 which is focused on the elimination of healthcare disparities and the IOM’s report “Unequal Treatment: Confronting Racial and Ethnic Disparities in Healthcare.” However, both of these reports focus on specific concerns for a smaller and more specific segment of the population.

Within communities of color and those with older and poorer residents, health disparities are a way of life and finding adequate healthcare is a daily struggle.  There are few voices that really speak to addressing their concerns and many are not even clear about nationalized healthcare, let alone whether they will finally be included in the process.

If nationalized healthcare is going to work it requires the fundamental understanding of the need for a new model for wellness in our society. If the focus is on healthy living and eliminating disparity, the national model needs a local approach and a personal touch.