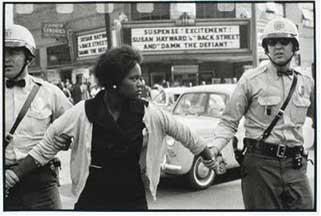 Racial Segregation Comes to Life within the Lens

The Houston museum the Menil Collection recently featured a gallery of hand-picked civil rights photographs in an exhibit called, “The World Was Watching.”  The phrase was a chant used at the Democratic Convention in 1968, and was chosen as the exhibit title to show how six photographers from the North traveled to the racist South to make a difference.

These pictures were handpicked by Michelle White, the museum’s coordinator. She recalled choosing from over 200 pictures as she looked for images that struck her emotionally and demonstrated the social struggles of the time.

“A show like this makes it a little more complicated. I wanted images that could communicate to the viewer without words,” White said.

Some of the exhibit photography showed the work of Dan Budnik, one of the six photographers on display in the exhibit.

“These photographers,” White said, “were all putting themselves in extremely vulnerable situations.”﻿

The photographers understood the change they had to bring to the South by showing what was really going on. Photojournalists claimed to be working undercover on imaginary beats in order to hide their revolutionary lifestyle.

“Photographer Dan Budnik of Life Magazine would talk to Chief (Bull) Conner and Governor George Wallace often,” White said. “He told them he was doing a story from the White perspective in order to gain access and information for his own activist purposes.”

Budnik went as far as to stand alongside protestors in the fight against civil rights.

The Menil Collection displayed images from the 51-mile protest from Selma to Montgomery, Ala. These photos by Budnick showed the grueling struggle for voter’s rights. Photographs depicted protestors on their third attempt to make the march.  Other attempts were thwarted by police brutality and heckling racists.

“In order to make this march possible, the federal government had to send 2,000 National Guardsmen to monitor the protestors along the route,” White said.

An emotionally moving image taken by Budnik showed Will Henry “Do Right” Rogers saluting an American flag held by a protestor.

White said, “Protestors were carrying flags along the march. National Guardsmen must salute the flag when they see it, and Dan caught the image of this particular guardsman during salute.”

The following guardsmen turned their back to the flag so as to not be forced into salute.

“Racial segregation was a way of life that Southerners were trying violently to protect,” White said.

The exhibit photographers worked hard to expose the extent of discrimination in the South. The museum hoped to in turn be a key player in the development of a more advanced society.

“I think museums in particular have a role in this world and in this society to present a perspective,” White said. “Museums should change your consciousness; make you see things differently.”

This exhibit showed the people’s movement. The Menil Collection depicted those fighting for what’s right, freeing the oppressed, and challenging the government. The de Menils were extreme civil rights advocates, supporting theories of human justice.