Obama vs. Romney on Social Values 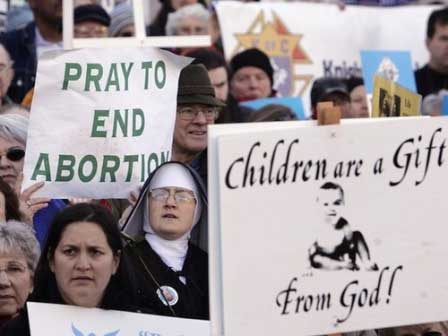 Social values continue to be a hot-button campaign issue in presidential politics (Photo courtesy of politix.topix.com).

Our spotlight on social values and the upcoming campaign will highlight the opposing views of the presidential candidates on the social concerns of the day including abortion, same sex marriage and embryonic stem cell research.

Governor Mitt Romney was quoted in 2005 in The Boston Globe as pro-choice, but has made it a point during the 2012 campaign to note that, if elected, he would nominate Supreme Court justices who would overturn Roe v. Wade and allow states to determine the legality of abortion according to The New York Times. He views the federal government as intrusive on this social value that is better settled closer to home and in the home.

According to the National Right to Life, President Barack Obama’s pro-abortion views and the administrations focus on abortions is “out of touch” with mainstream America’s pro-life mindset.

President Obama has frequently advocated for a woman’s right to chose and reproductive freedom, but also for better education and support systems to reduce abortions and encourage adoptions.

He views the federal government’s role on this social value as supportive and making sure that a woman’s constitutional rights are upheld in cases where family or local support may not exist.

According to the Gallup Poll, 57 percent of Americans oppose same sex marriages. Governor Romney, who campaigned in 2008 stating that he was against same sex marriages, has waffled on this issue during this campaign.

Although in 2011 he refused to sign a pledge against gay marriage, he has not spoken emphatically in support of same sex marriages, but he did state at the Republican National Convention that he supported gay adoption.

He maintains that the institution of marriage remains between a man and a woman.

During an ABC News interview in May, President Obama expressed his support of same sex marriages, although he favored traditional marriage in 2008, and he has also encouraged legislation that protects the rights of domestic partners previously ineligible for benefits.

His position is based, as he put it, on the view that “people should be treated the way we want to be treated and no one should dictate who you fall in love with.”

Regarding embryonic stem cell research, Governor Romney was in support of funding it in 2002, but currently he is opposed to this research and supports the Bush administration’s ban on funding.

According to a CBS News poll, 65 percent of the American public supports medical research through embryonic stem cells.