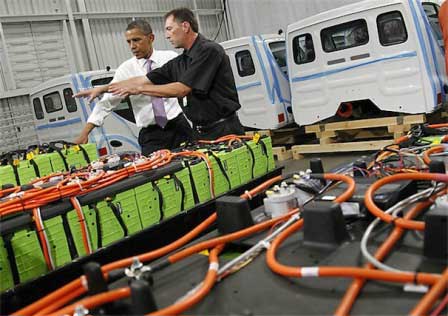 Obama and Romney: New Energy Sources and Protecting the Environment

Looking at the new energy sources discussed during the 2012 presidential campaign, there are some similarities in policy ideas from the candidates.

Both President Barack Obama and Governor Mitt Romney are interested in expanding drilling for oil and gas and the development of natural gas resources, but they differ in the means to make it happen.

Governor Romney’s energy plan encompasses reducing the power of key federal agencies. His plan would strip the Environmental Protection Agency (EPA) of the power to regulate carbon dioxide emissions. This is a greenhouse gas that the Supreme Court ruled being a part of the EPA’s Clean Air Act mandate.

Romney also envisions removing EPA restrictions that are preventing new energy sources from coal. His plan would also strip the Department of the Interior of its authority to issue permits for drilling on federal property.

Governor Romney would increase the ability for states to issue the permits and potentially access new energy sources faster.

His plan would eliminate the production tax credits for wind projects and shift more focus by maintaining tax incentives and tax breaks for oil and gas drilling totaling close to $4 billion.

Also, despite extensive environmental impact studies, he would open all federal lands and waters for drilling, including the entire Pacific and Atlantic coasts.

Romney is a supporter of the Keystone XL Pipeline that would run from Canada to Texas.

Regarding the Keystone XL Pipeline, President Obama approved the southern portion of the pipeline, but is awaiting findings from the State Department to determine if the rest of the pipeline is in the national interest, as many factors are involved.

His plan for new energy sources includes maintaining tax credits and incentives for renewable energy with wind and solar powered generation doubling during his administration.

Unlike Romney’s plan, President Obama’s plan would raise federal standards for the fuel efficiency of cars and light trucks and seek to reduce greenhouse gas emissions from fossil fuels due to climate change concerns.

He would eliminate the $4 billion a year in tax breaks for the oil and gas drillings and focus on the Clean Air Act mandates.

He would open more offshore drilling areas for new energy sources, but he would not open drilling areas off the Pacific coast and most of the Atlantic coast.

President Obama would also allow the Department of the Interior to keep its leasing authority and protect the environment.

Both President Obama and Governor Romney support the use of hydraulic fracturing in drilling, but the president wants to make sure that federal safety standards are in place and the EPA has outlined environmental guidelines working in partnership with major exploration companies.

Governor Romney would let the states regulate the hydraulic fracturing and has no provision in his plan regarding safety measures or oversight.

The candidates agree that the country needs new energy sources and each one has a plan that they feel represents the best direction for the nation.

Energy independence and environmental protection are the cornerstones of the most successful plan and voters will weigh the similarities and the differences.