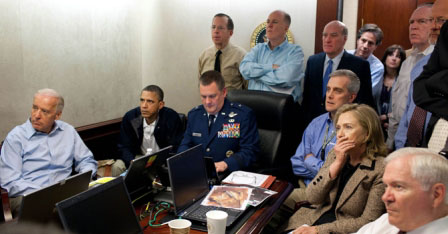 President Barack Obama’s key role in the death of Osama bin Laden has contributed to his success on national defense strategies (Photo courtesy of dawn.com).

Since the tragic events of Sept. 11, the national defense strategy of the United States has been largely focused on one primary objective – to find Osama bin Laden.

This objective was achieved as part of the national defense strategy of President Barack Obama.

In addition to fulfilling his campaign promise to withdraw the troops from Iraq, his plan to remove the troops from Afghanistan in 2014 with only a small number remaining to train the Afghan forces is still on course.

His national defense strategy entails a more streamlined military with an estimated $500 billion in military spending cuts over the next decade, getting rid of older ships and delaying the construction of new ones.

According to CNN.com, Obama’s military would place more emphasis on small Special Forces teams that can deploy to worldwide hotspots as well as continuing the use of unmanned drones.

The Obama administration has stressed the role that unmanned drones have played in fighting terrorism, especially in Yemen and Pakistan, and their effectiveness does not put U.S. troops in harm’s way.

Obama’s national defense strategy also includes maintaining talks in “hotspot” areas such as China and Russia ultimately reestablishing a relationship with Russia that resulted in a new arms control agreement and access to crucial supply lines for the troops in Afghanistan.

The emerging unrest in the Middle East has been a major example to showcase the differences in national defense strategy with Obama maintaining minimal presence and not providing arms to an un-solidified opposition force, but keeping a watchful eye on the country’s dangerous stockpile of chemical and biological weapons.

Governor Mitt Romney’s national defense strategy, according to CNN.com, would include direct support of weapons to the opposition and encouraging nearby Turkey and Saudi Arabia to provide arms as well.  His strategy does not include addressing the chemical and biological weapons that are stockpiled in Syria.

However, Romney’s plan also includes building up the United States military stockpile and increasing its global military presence by reversing the proposed cuts by Obama and streamlining the Defense Department’s procurement process.

His view is that the Pentagon’s “bloated” budget could sustain review that would cover the costs to increase the number of active troops and weaponry.

Romney has pledged that in his first 100 days, he would announce an initiative to increase the number of ships currently being built by the Navy from nine per year to 15.

His national defense strategy would include prioritizing the full deployment of a multilayered ballistic missile defense system. And despite the unique characteristics of the emerging Arab nations, Romney’s streamlining plan consists of organizing all diplomatic efforts in the Middle East under one official with full accountability.

Also, he is not in favor of a specific timeframe to remove the troops from Afghanistan as his decision would await recommendations from the commanders to determine if the overall mission was successful.

With just a brief snapshot, we have highlighted a number of differences regarding the national defense strategies from Obama and Romney.

The fragile balance of power in the Middle East and the number of uprisings associated with the “Arab Spring” should give pause to all Americans particularly as we reflect on the anniversary of Sept. 11.

What lessons have we learned?

Where do we go from here?

The late Rodney King said it so well, “Can’t we all just get along?!”