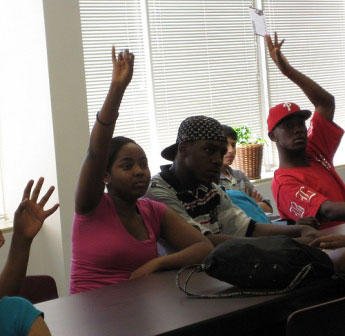 Obama and Romney: Focusing on Education

In our ongoing series on major issues impacting the 2012 election, our focus is now on the current education issues that are impacting our children and our future.

Massachusetts Governor Deval Patrick stated that his predecessor Mitt Romney left him a state that was 47th in the nation in education.

Standing on a platform that supports a voucher system, Governor Romney has challenged the effectiveness of President Barack Obama in addressing current education issues.

The lack of real oversight for NCLB at the local level is one of the major reasons that the country has so many current education issues.

Governor Romney has suggested that the Department of Education be abolished and that funding for schools be dispersed via a voucher system that rewards public and private schools.

According to education.com, this would be accomplished through the re-distribution of Title 1 funding – which currently supports poor students and those with disabilities.

However, there is no replacement for this vital resource or a format to implement the re-distribution.

Also, the Romney/Ryan plan outlines increasing school choice by the parents and reducing the influence of the teachers’ unions, particularly the National Education Association which is the nation’s largest.

This may provide for more transparency and increase the role of parents, but also increase costs for administration and follow-up.

The Romney/Ryan budget also includes cuts to programs that include Pell grants and other support for underprivileged students to attend college.

Facing major crises in our schools upon his inauguration, President Obama immediately attempted to address current education issues that pertained to the teaching standards and curriculum development.

While the president viewed NCLB as flawed, he believed that there were components that could be continued with serious reform especially in the area of accountability and teacher evaluations.

Through a renewed format directed by the Department of Education, President Obama has made inroads regarding the accountability of both public and private schools with testing standards and teacher evaluation formats.

As a better leveling of the playing field, he prefers charter schools over the voucher system. While critics may say that accountability would still be an issue for students in charter schools, it is the state’s responsibility to close underperforming charter schools, not the president’s.

Key components to President Obama’s plan to address current education issues are the changes that he brought to Science, Technology, Engineering and Mathematics (STEM) Education to prepare students who are able to compete globally.

With the American Opportunity Tax Credit, President Obama also provided incentive for recent college graduates facing the current education issue of student loans. By ensuring that the first $4,000 of college education can be used as a refundable credit, low income students should be more inspired to pursue higher education.

With an emphasis on self-sufficiency and parental choice, Romney’s plan to abolish the Department of Education, redirect Title 1 funding away from the disadvantaged to reward top performing public and private schools is a different approach to current education issues.

Conversely, President Obama continues to work on much needed reforms with NCLB, has increased the focus on STEM Education and has addressed the challenges of college students paying their own way through school.

Sometimes it is hard to decide, but addressing current education issues is necessary and vital.