Obama vs. Cain; Who Would You Vote For? 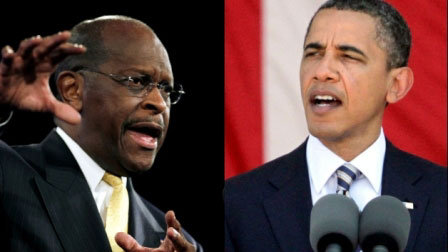 Although unlikely, an Obama vs. Cain election very possible

Obama vs. Cain: A Tale of Two Candidates (Hypothetically Speaking…Maybe??)

Gone are the days when tea parties involved little girls playing “make believe” and camping out happened in the woods with flashlights.

In today’s turbulent times Tea Parties are a movement and there are more protesters with bull horns who have occupied Wall Street than bullish trading.  Added to this mix is a hypothetical discussion about two possible presidential candidates from the two major political parties.  Obama vs. Cain, both African Americans, as presidential nominee – hmmm, what are the odds?  What are your views?

President Barack Obama, whose once high poll numbers are reportedly dropping due in large part to the growing discontent in the country along with rising unemployment and stalled legislation to spur the economy, is already on the campaign trail for re-election on the Democratic ticket.

Businessman Herman Cain is making a name for himself in the crowded field of Republican hopefuls. He has gained some national exposure, but he has no political experience and is pushing “fresh ideas” with an unproven platform.  A presidential election pitting Obama vs. Cain would truly be landmark and the significance is not lost on many in the African American community who are watching the 2012 election developments.

“The possibility of a presidential race with two Black candidates would be unquestionably historic.  If this were to happen, we should recognize that pitting the two against one another would create a new path of presidential campaigning from a rhetorical perspective,” comments  Tia T. Gordon, Founder and CEO of TTG+Partners, the nation’s only communications firm focused solely on issues of diversity and equity in higher education. “President Obama who is the first Black president of the United States would be contending with businessman Herman Cain who would be the first Black GOP presidential nominee. Putting aside the fact that many in the African American community would be full of pride seeing them given such a high-level political platform, my greatest concern would be how they would make the case for their right to that position.”

Some feel that a major case would be made and that it would help the country to look beyond the “color” line.

According to entrepreneur Derrel Johnson, “As an African American, it would be historic if both major parties were represented for the presidential election by African American candidates.  It would mean that we are a lot closer to color not being as important as the ‘content of our character’ to quote Rev Dr. Martin Luther King, Jr.  After all, ultimately, that is what it is all about.”

For others, while it would be an historic event, it would be no contest for them to make a choice.  “I absolutely have no problem with it.  It still doesn’t change my support for President Barack Obama,” states Randye I. Bullock, a retired Public Relations Specialist.

However, at the heart of the Obama vs. Cain election scenario – and again it is hypothetical – is the importance of the job itself and the agendas being brought to the table.  Some are not just in doubt regarding Cain’s credentials, but also his sincerity.

“Cain is not running for president, he is running for speaking fees and promoting his book tour. Cain is first and foremost a businessman, and most businessmen are tight with their money,” notes Manny Otiko, a freelance writer.  “He has figured out a way to promote his book and raise his profile, without spending much money. He said he was running for president. Look at all the free publicity he has received. Think of how much he would have spent in PR and advertising if he didn’t claim to be running for president. Cain has never won a political race in his life. The only other race he participated in was a Georgia Senate primary — and he lost.”
According to Gordon, the issues are deep in an Obama vs. Cain race and the discussions would be long lasting. “Not only would their statements be grazed with rhetorical criticism from both candidates’ parties (along with the Tea Party), but their comments would have impact on generations to come.  Old men today and young men tomorrow—especially in the African American community—would surely be influenced by their political communications.  Therefore, they should be mindful of running the kind of campaign that thrives on honesty, transparency, and sensitivity to reflect an understanding of what it means to all Americans if they were to be our president.”

Honesty, transparency and sensitivity – even in a hypothetical scenario – are gems of wisdom that can be beneficial in real world interactions.  We may look at tea parties and camping out differently and whether it does become an Obama vs. Cain election, it is most important that everyone is informed and involved in the process.