What Americans Can Expect in Second Term for Obama 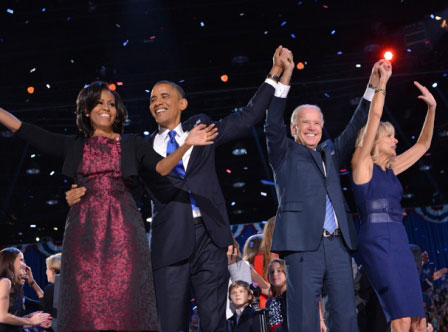 The first and second families celebrate a second term for Obama (Photo courtesy of biography.com).

Not since the notorious “Dewey Defeats Truman” headline in the Chicago Tribune in 1948, that was held aloft by President Harry Truman who actually won the election, have the experts and the press got an election result so wrong – until 2012.

In that post-World War II era, the Chicago Tribune was well documented as a “Republican-leaning” publication and because technology was not as advanced as today, news-type had to be set earlier for morning editions to be ready.

The Tribune banked its headline on the experts of the day and media pundits who all felt that Governor Thomas E. Dewey was going to handily beat Truman who finished the term of President Franklin Delano Roosevelt, the only president to hold four consecutive terms in office.

The second term for Obama was a sigh of relief for many, but a stunner for a large group on the opposing side – including the challenger who was so confident that he only had an acceptance speech.

This historical reference to Truman is significant because it mirrors the campaign of 2012 in a number of ways.

This election featured an incumbent Democratic president who inherited a major war and the subsequent impact on the economy.  In addition, he faced a difficult Congress and a popular Republican governor who brought a strong campaign and a perceived fresh approach to the nation’s problems following a war.

A second term for Obama has unveiled a nation that proclaims itself post-racial because it elected an African American president, but showed many of the same stereotypical attitudes that focused more on the racial composition of the candidates than their credentials.

The 2012 campaign became less of the blue and red state contest, but an affluent and majority White party versus a diverse, middle and lower class party.

The barbs that were exchanged were connected closer to personal attacks than strategic proposals.

The voting public who helped bring about the second term for Obama, have great expectations for the president who said that he was willing to listen more to all the people.

What can all of the people expect in the second term for Obama?

According to Susan Page at USA Today, who wrote “4 More Years: What to Expect in Obama’s 2nd Term,” Obama called for bi-partisanship in his victory speech to address four ambitious priorities over the next four years: reducing the deficit, overhauling the tax code, revising immigration laws and reducing the nation’s dependence on foreign oil.

She added, “Left unsaid was the reality that he also can now implement the hard-won achievements from his first four years — the health-care law called the Affordable Care Act and the Wall Street regulatory regime known as Dodd-Frank — which Republican rival Mitt Romney had promised to begin dismantling ‘on Day One’ in the Oval Office.”

Broadening the scope and speaking for the constituency that was noted as the “47 percent” and the “gifted” ones, Zerlina Maxwell, who wrote “What can Black America expect from a new Obama term?” for TheGrio.com, summed up the diverse perspective by stating: “The historic importance of changing the narrative around poverty and federal programs which directly impact people of color can and should be on the agenda for a second term; that shift will be important and could force the radicals out of the Republican Party’s decision-making ranks.

And while not necessarily the hope and change promised on the campaign trail five years ago, the narrative around poverty and working people combined with the protection of the Court’s progressive accomplishments is still plenty to look forward to over the next four years.”

Looking ahead and moving forward, the voting public made their choice and allowed a second term for Obama.

While there are those who do not believe that there will be much change with a Republican-led House, people can still have hope that his call for bipartisanship and inclusion for all Americans will be the driving force in a second term for Obama.

He does not have to worry about being re-elected. Now, he can focus on moving his agenda, expanding the inclusion of diverse ideas and building on his legacy.