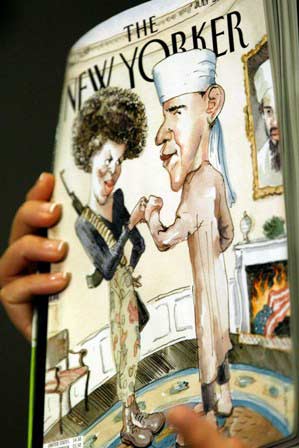 A Tale of Two Countries

Barack Obama’s historic journey to become the presumptive Democratic nominee for the upcoming presidential election is the culmination of those who struggled throughout slavery and the Civil Rights movement.  It is a testament to what Dr. King envisioned during his famous “I Have a Dream” speech in 1963, of children of all colors coming together for the good of mankind.

However, the gains in racial unity that Obama’s historic campaign has made have sometimes been overshadowed by the voice of intolerance and hate that sometimes come from his opponents.

On July 14, The New Yorker magazine released it latest issue with a drawing of Barack Obama wearing Muslim clothing—sandals, robe and turban—while his wife Michelle was dressed as a Black Panther dressed in camouflage with an assault rifle slung over her shoulder and wearing an afro.  In the background of the cover, drawn by Barry Blitt and titled “The Politics of Fear,” a picture of Osama bin Laden hangs over the fireplace while an American flag burns inside.

A spokesperson for The New Yorker said that the cover was a satire attempting “to hold a mirror to prejudice, the hateful, and the absurd.  And that’s the spirit of this cover.”

David Remnick, editor of The New Yorker said, “I can’t speak for anyone else’s interpretations, all I can say is that it combines a number of images that have been propagated, not by everyone on the right but by some, about Obama’s supposed ‘lack of patriotism’ or his being ‘soft on terrorism’ or the idiotic notion that somehow Michelle Obama is the second coming of the Weathermen or most violent Black Panthers.  That somehow all of this is going to come to the oval office.”

However, Obama’s camp saw the cover as offensive and not satirical.  “The New Yorker may think, as one of their staff explained to us, that their cover is a satirical lampoon of the caricature Senator Obama’s right-wing critics have tried to create.  But most readers will see it as tasteless and offensive.  And we agree,” said Obama’s spokesperson Bill Burton.

Even presumptive Republican nominee John McCain believed the cover was in bad taste saying it was, “totally inappropriate and frankly I understand if Senator Obama and his supporters find it offensive.”

The latest racial and religious controversy in this year’s presidential election comes as leaders from the fields of politics, business, entertainment, military, media and religion plan to gather in the nation’s capital from July 24-25 to participate in a nationwide conference on “Race and Reconciliation in America.”

The conference is being hosted by former U.S. Defense Secretary William S. Cohen and his wife, author and playwright Janet Langhart Cohen.  The couple authored Love in Black and White, which chronicles the prejudices they have endured as a bi-racial couple.  The Cohen’s hope their conference will initiate a serious dialogue on racial, ethnic and religious prejudice.

“Our goal is to begin a national conversation to deal with the truth, understand the need for accountability, and learn how we can work together to really achieve a post-racial society,” said Secretary Cohen.

In essence, America has become two countries: one united despite racial and religious difference and another determined to maintain the divisions and barriers that many are desperate to destroy.  The question is will America become the spring of hope that Obama is envisioning or remain the winter of despair as some opponents are hoping?