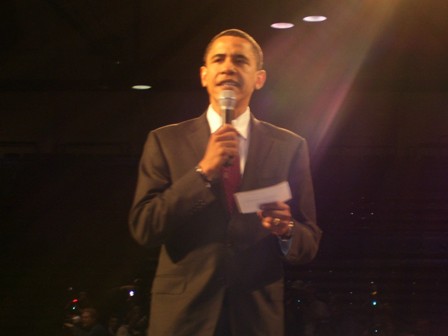 Barack Obama speaks to a crowd in Houston (Todd A. Smith/Regal Magazine)

Throughout the Democratic primaries, Senator Barack Obama has dedicated his entire campaign to change.  Change from the usual divisive politics and mudslinging that have characterized many presidential elections by putting more emphasis on the issues that are important to voters such as the wars in Iraq and Afghanistan and the economy.

However, as Hillary Clinton continued to attack Obama’s elect-ability, the Obama camp began airing negative ads in Pennsylvania with hopes of halting some of her momentum in that crucial state.

“She’s got the kitchen sink flying, the china flying, the buffet is coming at me,” Obama said about Clinton.

In one Pennsylvania ad, Obama stated that another Clinton presidency would be better than the current Bush administration only because the bar had been set so low.

According to the Los Angeles Times, “Such comments probably led to exit poll numbers out of Pennsylvania showing about half of the voters thought he unfairly attacked Clinton.  About 60 percent of the voters made their mind up in the campaigns final days.”

The Los Angeles Times also reported that more than two dozen superdelegates believed the bickering would continue for up to six weeks and ultimately strengthen the eventual nominee.

However, many believed that the negativity would weaken the nominee and the party as a whole, and virtually no one supported Clinton’s notion of fighting on to the convention in Denver.

“If the tone of the presidential campaign continues on this negative trajectory, it will create wounds that are hard to heal,” said Rep. Chris Van Hollen (D-Md).  “And it would be a big mistake to have a divisive convention in the full glare of TV lights.”

According to the Associated Press, Obama now has 1,723.5 delegates and Clinton has 1,592.5.  The Democratic nominee has to secure 2,024 delegates to win the nomination.  Approximately 300 superdelegates out of 800 remain uncommitted.

Despite overcoming the adversity that comes with being a presidential candidate, not to mention the first serious African American candidate, Obama must always remember what made him the Democratic “golden boy.”

For years, Americans have watched as politicians conducted business as usual at the detriment of U.S. citizens.

Democrat and Republican voters have both watched as candidates dished dirt on their opponent, while seeming to ignore the problems facing average American citizens on a daily basis.

Families with insufficient financial resources to feed their families do not benefit from whether or not Obama wears an American flag on his lapel.

In addition, widows who lost their husbands in Iraq do not benefit from whether Clinton had to dodge sniper fire in Bosnia.

What all Americans benefit from is the unity that initially surrounded Obama’s campaign and the hope that this country could come together after eight polarizing years of the Bush administration.

The ability to bring all Americans together despite their differences and the ability to repair America’s reputation overseas is what Obama needs to rely on, not the same old Washington politics of the past, if he is truly dedicated to change.

“It’s easy to get caught up in the distractions and the silliness and the tit-for-tat that consumes our politics; the bickering that none of us are immune to, and that trivializes the profound issues—two wars, an economy in recession, a planet in peril,” Obama told a crowd in Evanston, Ind.  “But that kind of politics is not why we’re here, it’s not why I’m here and it’s not why you’re here.”

It is important the Obama remember it is not how he got here as well.