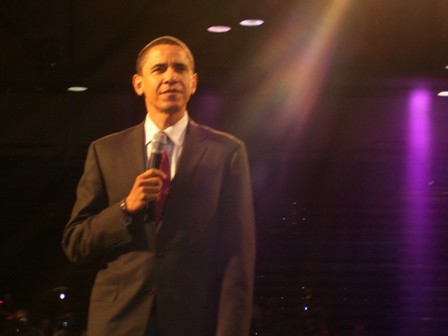 Obama speaks at a campaign rally in Houston

When it finally seemed as if Barack Obama had regained momentum, after losing primaries in Ohio and Texas, critics played a card that is still polarizing today, and ultimately threatening his goal of bringing all Americans together in a turbulent era.

In the 2008 election campaign, Obama has distanced himself from his rivals, not by solely focusing on the hot-button issues that have divided Americans in the past, such as 4,000 lives lost in the Iraq War or the imminent economic recession.  However, he has done so by uniting people of all colors and backgrounds to work together for the common good.

Nevertheless, past remarks by the controversial former pastor of Obama’s church in Chicago may derail some of that momentum, as some have questioned his “true” political ideologies and patriotism.

“I think it’s ridiculous to try to penalize someone for being a part of a congregation or sitting under a pastor and being responsible for whatever the pastor’s views are,” said Pastor Patricia Rickenbacker of the predominantly Black Living Hope Fellowship Baptist Church in Massapequa, N.Y.

“All the other levels that Pastor Jeremiah Wright has ministered to Obama’s family, they have developed some type of personal relationship there that is not crossed out or cancelled because there’s a difference in ideology or message.  You hate the message, but you don’t hate the messenger,” she added.

Obama responded to the controversy by delivering what critics have called the most important speech on race relations since Martin Luther King’s “I Have a Dream” speech in 1963.

If there is a litmus test that says Black candidates must distance themselves from the Black community and leaders who are still bitter over past racial injustices, then America may not have come as far as she thinks she has.

Has White America come far enough to understand that the wounds of discrimination still hurt for the thousands who were beaten, jailed and killed so that Obama could be sitting on the cusp of history?

In addition, has Black America come far enough to realize that race relations have improved and many in the younger generation see people for the content of their character and not the color of their skin?

“I was uncertain whether Obama was going to be able to get out of the tired old racism box he was painted into.  I am now more convinced than ever that Obama is the right candidate at the right time to move us into the 21st century without a whole lot of the baggage that has been weighing us down as a nation,” said Meryl Vladimer of Brooklyn, N.Y.

However, Harvey Karron stated, “Obama knew his pastor for more than 20 years.  He had to have known about the hateful remarks that his pastor said against America.  Yet, Obama and his wife continued to think of the Rev. Jeremiah Wright as a great inspiration.   If Obama wanted to be a great healer, unifier and different type of politician, he should have had the strength to move his family out of that church.”

Nevertheless, Rabbi Jonathan Waxman said he often hears from congregants who do not agree with his sermons or political views, according to the Associated Press.

“Religious leaders don’t necessarily represent the views of the people in the pews.  Sometimes we are deliberately provocative, knowing that not everybody will be thrilled,” said Waxman.