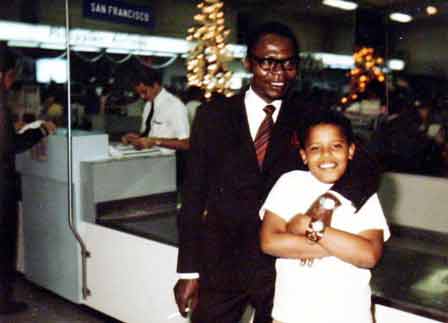 The future presidential candidate and his father Barack Obama, Sr./AP

I recently spoke to a class of high school freshmen in Houston about the value of a college education and avoiding the pitfalls that so many men of color seem incapable of doing.

Many times speaking to inner-city youth can be a daunting task because they do not see the opportunities that many middle-class youth see on a daily basis.

They do not see Black lawyers, doctors and educators in their everyday lives.  They often see broken families, drug dealers and convicts and believe that fate will lead them to the same destiny as those around them.

However, with the recent success of Barack Obama’s presidential bid, children from all walks of life are finally beginning to realize that there are no doors closed to them if they apply faith, perseverance and hard work to their dreams.

Obama followed his stunning victories in Iowa and South Carolina with resounding victories in states like Louisiana, Kansas, Utah, Georgia and North Dakota heading into the primaries on March 4 where hundreds of delegates are up for grabs in Ohio and Texas.

The Illinois senator’s improbable journey began in Hawaii, the son of Kenyan immigrant Barack Obama, Sr. and Ann Dunham of Kansas who met while they were attending the University of Hawaii.  Their son was born on August 4, 1961, but his father eventually chose to return to his homeland, leaving Obama to be raised by a single White mother.  However, he refused to let criticism or controversy stop his dream of becoming leader of the free world.

Obama put law school on hold to serve the poor in Chicago, becoming a community organizer with a church-based group.  He eventually earned his law degree in 1991 from Harvard, in the process becoming the first African American president of the Harvard Law Review.

He served in the Illinois State Senate for eight years before becoming the third African American since Reconstruction to be elected to the United States Senate.  Furthermore, he needs 884 more delegates to become the first Black nominee for the White House in American history.

When critics said Americans could never elect an African American to such a high office, Obama said, “Yes, we can!”

When those same critics said Americans could never overcome their racial and religious differences and unite, Obama replied, “Yes, we can!”

And when someone tells you you cannot do something because of your race, gender or socioeconomic background, remember the mantra of this historic campaign and simply reply, “Yes, I can!”