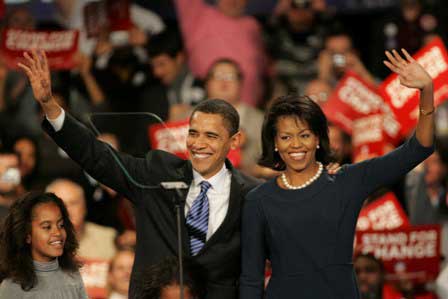 Many thought the day would never come.  A day that all Americans could prove to their children that they could become whatever they want in life no matter what their background is.  A day that Americans could put aside their differences and see their neighbors for the content of their character and not the color of their skin.

Barack Obama’s stunning victory at the Iowa Caucus ignited a spark among Democratic voters, reminiscent of the days of Camelot and John F. Kennedy.  Many believed that a state like Iowa, with a miniscule Black population, would never elect an African American to such a high position, but Obama’s message of change resonated in the Hawkeye State, as 37.6 percent of Iowa voters selected him to represent the Democratic party in November.

According to the Associated Press, Obama’s victory marked the first time an African American candidate has won such a vital caucus or primary.

“Years from now you’ll be able to say, ‘This was the moment when it all began.’  This is the moment when we finally beat back the politics of fear and doubt and cynicism,” a victorious Obama told a crowd of supporters at a Des Moines, Iowa sports arena.

His success among African Americans should assist in his chances in November because many Black voters still believe he is not electable.

Obama’s wife Michelle believes America is ready for a Black president despite the skepticism.

“Ain’t no Black people in Iowa.  Something big, something new is happening.  Let’s build the future we all know is possible.  Let’s show our kids that America is ready for Barack Obama right now,” said Michelle Obama at the Trumpet Awards, a gala celebrating achievement in Black America.

Despite his resounding win in Iowa, and pollsters predicting a double-digit win in the first primary of 2008, Obama finished a close second to Clinton in New Hampshire days later.  Surprisingly, Clinton defeated Obama 39 percent to 37 percent in the Granite State.  However, the Illinois senator was still upbeat and optimistic in defeat.

“We always knew our climb would be steep.  You made it clear that at this moment in this election, there is something happening in America … You can be a new majority,” Obama told his supporters in New Hampshire.  Clinton recently won the primary in Michigan and the Nevada caucus also.

According to Allen G. Breed of the A.P., “Obama’s stunning victory over Hillary Rodham Clinton in the Iowa caucuses and strong second in New Hampshire’s primary showed he could win White votes.  But some say the South Carolina contest offers a new test of his viability.  Can he energize Black voters in places where their numbers could help him win in November?”

On January 26, Obama won the South Carolina primary in a landslide, winning 55 percent of the Democratic vote.

At least half of South Carolina Democrats are Black and they could have been persuaded to distance themselves from Clinton because comments she and her husband Bill Clinton made, which some people view as racially insensitive.

Clinton recently stated that Dr. Martin Luther King, Jr.’s dream of racial equality was realized only when President Lyndon Johnson signed the Civil Rights Act of 1964.  The former president later said that Obama was telling a “fairy tale” about his opposition to the war in Iraq, and that he has received a free pass in this election.

Clinton later went on “Meet the Press” to explain her comments and implied that Obama was injecting race into the election.

“I think it offended some folks who felt that somehow diminished King’s role in bringing about the Civil Rights Act.  She is free to explain that, but the notion that somehow this is our doing is ludicrous,” Obama replied.

According to the A.P., Clinton’s advisors claim that an Obama staffer has compiled examples of comments by Clinton and her surrogates that could be construed as racially insensitive.  The memo later surfaced on some political Web sites.

“To me, as an African American, I am frankly insulted the Obama campaign would imply that we are so stupid that we would think that Hillary and Bill Clinton, who have been deeply and emotionally involved in Black issues—when Barack Obama was doing something in the neighborhood; I won’t say what he was doing, but he said it in his book—when they have been involved,” argued BET founder Bob Johnson in a reference to Obama’s past drug use.

Johnson later said he was talking about Obama’s community activism and not his past drug use.

Former North Carolina senator John Edwards replied, “I must say I was troubled recently to see a suggestion that real change came not through Rev. Dr. Martin Luther King but through a Washington politician.  I fundamentally disagree with that.”

Ironically, the change that Dr. King gave his life for could be the same change that gives America its first Black president.  As Obama’s campaign slogan says, it is a “change we can all believe in.”