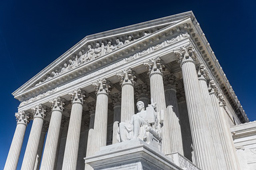 Justice Thurgood Marshall and Justice Clarence Thomas are the only African-American judges to sit on the United States Supreme Court.

Will the Next Black U.S. Supreme Court Justice Please Stand Up?

With President Donald J. Trump in the White House, there might soon be a law prohibiting Black Americans from serving as United States Supreme Court justices.

That was a joke.

Seriously, with President Trump in office the likelihood of seeing the third Black Supreme Court justice seems unlikely, but there are many qualified candidates.

Whoever the third Black Supreme Court justice turns out to be or when it comes to pass, that judge will face much scrutiny from the Black community.

For many, the first Black Supreme Court Justice Thurgood Marshall remains a giant and a stalwart when it comes to the rights of minorities and the poor.

However, second Black Supreme Court Justice Clarence Thomas still receives criticism from many in the Black community for his stances on issues like affirmative action and voting rights, which seem to be detrimental to the Black community.

No one really knows what to expect from a future Supreme Court justice except the future justice.  But there are several potential candidates that RegalMag.com would like to profile.

Paul Watford—Paul Watford is a Southern California native and a 1994 graduated of the UCLA School of Law.  Watford clerked for Supreme Court Justice Ruth Bader Ginsburg and had quick tenure as an Assistant U.S. Attorney in addition to working for years at a private law firm.  The Ninth Circuit of Appeals judge was considered by former President Barack Obama to replace the late Supreme Court Justice Antonin Scalia.  Trump’s nominee Neil Gorsuch eventually filled that position.  During Obama’s consideration of a replacement for Justice Scalia, Watford received praised from both conservatives and liberals alike.

Carl Stewart—Carl Stewart, the Chief Judge of the divisive and controversial Fifth Circuit of Appeals has everything that one would want from a future United States Supreme Court Justice.  Stewart is the definition of the American dream, coming up in the segregated South and working his way to the top despite the discrimination he faced along the way.  Even despite the racism he has experienced coming up in Louisiana in the 1950s and 1960s, Stewart has not let the anger from others make him bitter and angry himself.  He is the most influential federal judge in America.  Stewart is the first Black Chief Judge of the Fifth Circuit.  He is vice president of the American Inns of Court and previously chaired the Federal Rules Committee.

Ann Claire Williams—The number three should already hold a special place in the heart of Ann Claire Williams.  Williams, the first judge of color for the United States Court of Appeals for the Seventh Circuit was also the third Black woman to serve on any United States Court of Appeals.  The federal judge also served on the United States District Court for the Northern District of Illinois.  At the age of 35, Williams became the youngest woman ever to serve on the federal bench.  According to AmericanBar.org, “She was the first woman and judge of color appointed Chair of the Court Administration and Case Management Committee of the Judicial Conference of the United States (and) was the first judge of color to serve as president of the Federal Judges Association.”