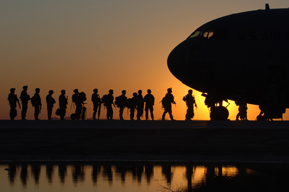 On Jan. 4, an al-Qaida linked group attacked Americans in Kenya.

A Chicago area mother and father are mourning the loss of their 23-year-old son killed by al-Qaida extremists a few days after New Year’s Day.

Henry “Mitch” Mayfield Jr. and two other Americans lost their lives on Jan. 4 in a pre-dawn raid in Kenya.

“Thank you to all that have reached out to my husband and I with your touching words regarding the loss of our son Army specialist Henry Mayfield Jr.,” wrote Carmoneta Horton-Mayfield on Facebook. “We may not be able to respond to them all at this time but we feel the love and we appreciate you all. Please keep our family in your prayers.”

The young Mayfield only joined the Army in June 2018 to help pay his college tuition.

“He really couldn’t afford college, so he figured that the Army would help him through that,” Mayfield’s father said. “He was looking for better opportunities, but also he enjoyed serving. He was that kid. He would help. It fit him. It was good for him. He enjoyed being in the Army.”

Despite joining the military to make a little extra money to pay for tuition, his father Henry Mayfield Sr. said that his son had grown to like serving in the military.

Furthermore, he considered making it a full time career even after his military commitment ended.

His father said that he also considered coming back home to start his own trucking business like his father.

Mayfield Sr. said that his son had been in Kenya since October, installing, maintaining and repairing heating and cooling systems.

Mayfield last talked to his parents on New Year’s Day via FaceTime, telling his mother that he was safe in the African country.

His father said that he FaceTimed with him and his wife two or three times a week.

Mayfield Sr. said he would hold on to that last conversation and all memories of his late namesake and son.

Mayfield Sr. described Mayfield Jr. as “bubbly” and “the life of a party.”

The proud father said that his son was such a huge LeBron James fan that he had shunned the hometown Chicago Bulls in favor of the Los Angeles Lakers.

After his death, his mother also took to social media to share pictures of her hero son.

Actually, Mayfield’s mother was not alone in heaping praise on Mayfield.

Mayfield’s neighbor and Army veteran Rochelle Crump said, “Too often we’re hearing this, but we don’t take it lightly. When we lose one, it affects every last one of us. Knowing that we’ve lost one, we have to come together to support that family.”

Even Mayfield’s hometown mayor spoke out to honor his sacrifice.

“Everybody is kind of thrown for a loop, you hate this kind of stuff happening,” said Hazel Crest, Ill. Mayor Vernard Alsberry.

The soldier’s parents recently flew to Dover Air Force Base in Delaware to pick up his body.

The Chicago Tribune reported, “Al-Shabab, based in neighboring Somalia, claimed responsibility for the assault, in which they overran a key military base used by U.S. counterterror forces, killing three and destroying several U.S. aircraft and vehicles.

“It was the al-Qaida-linked group’s first attack against U.S. forces in the East African country, and the military called the security situation ‘fluid’ several hours after the assault, which also left five of the attackers dead.”

A week before the attack in Kenya, an al-Shabab truck bomb killed 79 people in the Somalian capital city.

The extremist group also attacked Kenyan fighters multiple times in the past for sending Kenyan troops to fight in Somalia.

Two other American contractors suffered injuries as a result of the attack.

“The wounded Americans are currently in stable condition and being evacuated,” said U.S. Africa Command.

U.S. Army General Stephen Townsend said, “Our thoughts and prayers are with the families and friends of our teammates who lost their lives (on Jan. 4). As we honor their sacrifice, let’s also harden our resolve. Alongside our African and international partners, we will pursue those responsible for this attack and al-Shabab who seeks to harm Americans and U.S. interests.”