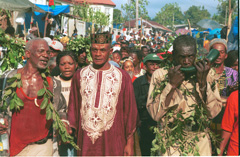 Maroon Colonel Sidney Peddie (center) is flanked by maroons wearing traditional warrior dress as they marched through the streets of Accompong, in Saint Elizabeth, Jamaica on Jan. 6, 2002.  This was during the annual Accompong Maroon Festival to celebrate the birthday of Maroon leader Cudjoe and their victory over the British (Photo Credit: AP Photo/Collin Reid).

All Revolutions Were Not Televised

Black slaves often face posthumous criticism for not fighting back and rebelling against their slave owners.

Many see it as a sign of weakness or assimilation that Black slaves just accepted their lot in life.  But what many critics have accepted as the truth is far from it.  The truth has just been obscured or ignored in order to promote a romanticized version of history.

And like Sioux chief Red Cloud from America, Captain Cudjoe of the Maroons forced the British occupants of Jamaica to agree to a legal settlement largely on his terms and not on the terms of his White counterparts.

According to “Slave Resistance: A Caribbean Study,” “During the 18th century, the powerful Maroons, escaped ex-slaves who settled in the mountains of Jamaica, carved out a significant area of influence.  Through the use of slave labor, the production of sugar in this British colony flourished.  But the courageous resistance of the Maroons threatened this prosperous industry.

“These efforts included plantation raids, the killing of White militiamen, and the freeing of slaves.  The threat to the system was clear and present; hence, the planters were willing to sign a treaty with the Maroons in 1738.”

“Slave Resistance: A Caribbean Study,” states that the Maroons were originally Spanish runaway slaves that had escaped to the mountains of Jamaica.

While in the mountains, the Maroons created their own villages and culture separate from the slave culture that they were accustomed to.

Even though the mountains they occupied were a considerable distance from White planters and slave owners, confrontation with their White counterparts was inevitable, which led to the First and Second Maroon Wars.

According to “The African American Encyclopedia,” their movement eventually reached North America as well.

The encyclopedia states, “In North America, Maroons also were called ‘outliers.’  Sometimes these groups were racially mixed, including Native Americans and Whites.  Maroon bands, often armed, harassed and raided individual plantations, disregarded local laws in order to help other slaves escape, and provided refuge for those fugitives who chose to join them.”

According to “The African American Encyclopedia,” living conditions for the Maroons were often very harsh, but they willingly chose those harsh circumstances over the harsher realities of slavery.

The fact that the former slaves were willing to fight and die for their freedom, which was a serious threat to the way of life in Jamaica, led to a peace treaty between the Maroons and the planters.

According to “Slave Resistance: A Caribbean Study,” “On March 1, 1738, the articles of pacification with the Maroons of Trelawny Town signaled to Jamaica that a new era was emerging.  The English planters had feared the rising power of the Maroons, and therefore tried to subdue them.

“This proved to be unsuccessful, consequently causing the English to realize that making peace with the Maroons was the only possible solution.  This treaty was the first of its kind and it demonstrated that a group of rebellious ex-slaves had forced a powerful class of planters to come to terms.

“This was an unlikely event during the eighteenth century, given the dominance of the planter class across the Caribbean.  Yet the fact remains that the treaty did not solely serve the planters’ interest.  For example, article three of the treaty states that the Maroons were given 1500 acres of crown land, a necessity for the Maroons to maintain their independent way of life.  In addition, it made a boundary between the Maroons and all the planters, which was to avoid future conflicts.”

Unfortunately, several articles of the treaty indicated victory for the planters and subjugation of the Maroons.  Nevertheless, they showed that the band of ex-slaves were willing to fight back and like Cinque and the revolutionaries on the Amistad slave ship, were victorious against their European counterparts.