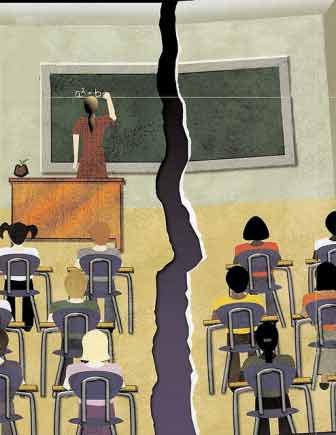 The achievement gap in education shows a big divide between the races (Image by Natalie Goode-Henry/Regal Magazine).

Narrowing the Achievement Gap in Education

Education is the key to unlocking the door to advancement, and for over a decade that door has remained locked for Black students who underperform in academics compared to their White peers in public schools around the country.

The Black-White achievement gap—an educational measure between two ethnic groups in which performance on state exams, high school and college admittance and completion rates get evaluated by the federal government —is the source of a new social movement from two educators with varying philosophies on narrowing it.

Rod Paige, former U.S. Secretary of Education under George W. Bush, has described the achievement gap in education as one of the greatest civil rights issues of our time.  He writes in his book The Black-White Achievement Gap, (AMACOM, 2010) that authentic leadership from the Black community resembling that of the Civil Rights Movement will help to narrow the achievement gap in education.

Ronald Ferguson, economist and director of the Achievement Gap Initiative at Harvard University, says leadership is an important aspect of the achievement gap in education but the issue needs to be broadened.

“Civil Rights was a framing for 50 years ago, it’s too imprecise,” Ferguson tells Regal. “Even our White students aren’t the best [at academic performance] in the world. [There needs to be a] push towards excellence towards all segments of the population.”

The National Center for Education Statistics released a report in May measuring the achievement gap in education. The report determined that White students in 4th, 8th and 12th grade outperformed their Black peers on state exams in reading and math.

According to the National Assessment of Educational Progress (NAEP), which compiles research on national test scores and was cited in the report, Black students in 4th grade scored 205 out of 500 on the reading exam, compared to White students scoring 230 points.

The 8th grade held the highest Black-White achievement gap for 2009 (when compared to 4th and 12th grade achievement gaps in math), with the average math score of Black students less than that of White 8th graders by 32 points.

“People are overwhelmed, afraid to confront it and afraid not to confront it,” says Ferguson, who has visited schools around the country discussing the issue. “They’re hesitant to talk about it because it’s blaming the victim. These [discussions] need to start at home.”

Ferguson cites early childhood development and parental guidance as potential keys in narrowing the achievement gap in education. In his research he found that in first grade, the percentage of Black and White parents reading to their children daily was about the same, but by fifth grade 70 percent of White parents continued to read to their children daily compared to 40 percent of Blacks.

“Roots of [the] achievement gap (in education) are in early life experience, ages 1 and 3. The best evidence [shows] that gap is not there at age 7, but at age 3,” says Ferguson. So he suggests parents spend more time reading to kids and teaching them basic math; foundational skills that are disguised as leisurely activities.

Paige and Ferguson both recommend an active community rallying around this issue to help bridge the achievement gap in education that was once narrowed during the 1970s and the 1980s. The educators prescribe five elements to achieve equity in education:

2.      School involvement, teacher participation in engaging all students to learn

Ferguson added a sixth element, community members that can support and advise parents.

“[This is] the early stages of a national social movement.  We’re finding ways for parents, employers and community-based organizations, informal peer groups to support [an] aspiration toward excellence,” says Ferguson, author of the Pathways to Prosperity project that examines career training as part of school reform.

If you look really closely, some schools already exhibit those qualities such as Benjamin Banneker Academic High School in Washington D.C., a magnet public school that boasts a student graduation rate of 100 percent.

That statistic is rare in the District of Columbia where it has the lowest freshman graduation rate in the nation with 56 percent, compared to the national average of 74 percent.

“The preparation [for students to] be globally competitive,” says Berger. “[I hope they walk away from Banneker] being prepared for life and all aspects of it.”