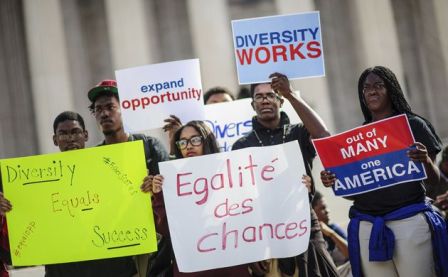 Many protestors favor keeping affirmative action in schools, but its elimination could help HBCUs (Photo courtesy of motherjones.com).

A Renaissance for Black Historical Colleges?

A nation is now divided over whether or not affirmative action should be reversed.

At the center of this debate is 22-year-old Abigail Fisher who brought a claim against the University of Texas claiming she was denied admission to the university because of her race.

Many believe that this case will ultimately end affirmative action within universities throughout the nation.

Affirmative action had been set into place to provide benefits to minority groups to help make up for disadvantages that are associated with discrimination throughout history.

“In a country where the reality is our educational system fails to prepare African American, Native American and Latino students, for her to actually have the audacity to say ‘I probably would have gotten a better job offer had I gone to U.T.’ is cowardly and ridiculous,” said 23-year-old Emmanuel Maduakolam.

The Supreme Court ruled back in 2003 that universities could consider race as a factor if it was used to create diversity amongst the student body; University of Texas being one of these universities.

“The fact is affirmative action right now is a way to ensure not only a university’s diversity but to bring different ideologies and cultures together while students work towards getting a better education and gradually eliminate racial ignorance,” said Maduakolam.

If affirmative action within universities is overturned and schools can no longer admit students based on race, it is very likely that Black historical colleges will benefit greatly.

However, not all Black students prefer to attend a school that is predominately Black.

Although minority students are capable of getting into other universities based on merit, some are admitted into schools because of affirmative action and the school’s desire to achieve diversity.

If affirmative action were to end, many students would find themselves having to attend Black historical colleges.

Affirmative action almost forces people to realize that there is an inequality and injustice in our society because of our country’s history with minorities.

“There are still many socioeconomic inequalities that are strongly intertwined with race,” said 23-year-old Brittany Grierson. “I think that there needs to be a conscious effort to remedy these inequalities.”

Many minority students may not realize the role that affirmative action played in their admissions because this is not something publically advertised when a student is accepted into a university.

One may assume it was based on their grades, extracurricular activities as well as other bullet points on their resume.

However, race is something that many universities have been forced to consider when deciding a student’s fate. By taking this option off the table, universities will no longer have to deal with being forced to think about the races of their students to help create a diverse student body.

Whether the Supreme Court decides to overturn affirmative action in universities or not, this case has already stirred the pot to controversy.

If affirmative action were to end, Black historical colleges may flourish.

However, how it may affect the rest of the country might not be as promising.