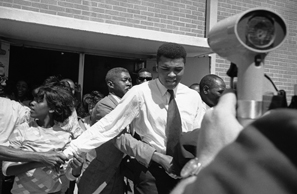 Late heavyweight boxing champion Muhammad Ali is beseiged by fans as he leaves the gymnasium at Bishop College in Dallas on March 28, 1967.  The champ and minister of Black Muslims spoke to students at the predominantly Black Baptist institution (Photo Credit: AP Photo/Ferd Kaufman).

If an African-American student in the 20th century wanted to study theology in the state of Texas, a good chance existed that they attended Bishop College or considered Bishop.

Like Leland College in Baker, La., founders set up Bishop College as an institution to train future clergy members in the teachings of the Holy Bible.

And during its 100 year run, some of the most influential and enlightened ministers west of the Mississippi called Bishop their home.

Unfortunately, like Leland, Bishop is often forgotten by the younger generation.

Therefore, it is the duty of the RegalMag.com staff to resurrect Bishop from the history books and into the minds of the next generation.