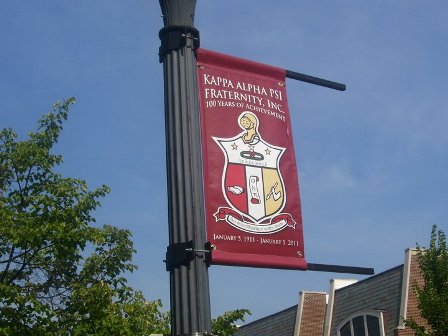 Imagine being allowed to attend a prestigious university, but at the same time being barred from all student activities such as contact sports.  Imagine being able to enroll in classes taught by some of the most revered professors in America, but because of your skin color being forced to stand outside the classroom to hear the lecture.

These were the circumstances that Black students found themselves in at Indiana University in 1911.  As a result, those circumstances led 10 bold Black male students to found Kappa Alpha Psi Fraternity, Inc. on Jan. 5, 1911 in Bloomington, Ind.

From July 5 through July 10, tens of thousands of Nupes (the nickname for members of the fraternity) returned to the Indianapolis area to celebrate the Kappa Alpha Psi centennial, commemorating 100 years of achievement.

“Fraternities and sororities are very special, particularly on the African American college campus.  They were founded at a time in the early 1900s where most African Americans were not truly invited into society on the college campuses,” former Kappa Grand Polemarch Dwyane Murray told NPR.

“For example, Elder (Watson) Diggs, the principle founder of Kappa Alpha Psi, often times could not take certain classes, couldn’t participate in contact sports, didn’t have the true social environment that his peers enjoyed on the college campus.  So he looked across the college campus and realized there was a need to work and do something a little bit different regarding the academic, the social and the economic opportunity for individuals on (the) Indiana campus.”

The Kappa Alpha Psi centennial celebration was a time of reflection, reunions and rededication to the fundamental purpose of the fraternity, which is achievement in every field of human endeavor.

Members, both known and unknown, participated in events from golf tournaments to concerts, which included: Toni Braxton and En Vogue as well as fraternity members Cedric the Entertainer, Marvin Sapp and Nephew Tommy of “The Steve Harvey Morning Show.”

Although the Kappa Alpha Psi centennial was a time of celebration, to reflect on the progress of Black Americans over the last 100 years is not just a testament to one fraternity, but a testament to an entire people.

One hundred years later, it is still not easy to achieve that American dream, especially if you are of color with very little financial means to make your dreams a reality.  But 100 years ago, Black Americans not only had to fight the normal battles of life, but also the battles of racism, injustice and extreme resistance from many of their White counterparts.

Nevertheless, the 10 founders of Kappa Alpha Psi went on to become lawyers, dentists and entrepreneurs in the early 20th century; professions that many still believe are unachievable for many African Americans.

Furthermore, the Kappa Alpha Psi centennial was a time celebrate some of the famous names that call Kappa their fraternity, which include:  the late Arthur Ashe, Johnnie Cochran, Wilt Chamberlain, Ralph Abernathy, as well as Bill Russell, Tavis Smiley and BET founder Bob Johnson.

“I think (the founders) would be absolutely amazed at what they started and how the organization has stayed true to their dreams and visions,” said Eugene Anderson, co-chair of the Kappa Alpha Psi centennial celebration.

The dreams, visions and experiences of those 10 brave students would become a microcosm of most Americans of African descent, and being founded at a predominately White college gives Kappa a unique perspective, different from the four other African American fraternities.

“To be founded at majority-White institution in the Midwest in 1911 is, I think remarkable,” said Ed Marshall, vice president for diversity, equity and multicultural affairs at Indiana University.

And 100 years later as the members celebrated the Kappa Alpha Psi centennial it is still remarkable that a century ago, these brave students inspired thousands to achieve in every field of human endeavor and as a result broke down countless barriers for African American men across this great country.