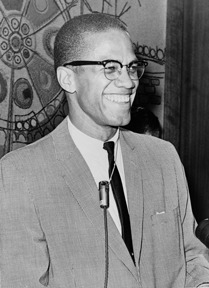 A recent Netflix docuseries has led to the reopening of Malcolm X’s assassination investigation.

Who is William Bradley?

Netflix recently opened up a can of worms with the new docuseries, “Who Killed Malcolm X?”

For decades, Talmadge Hayer (Thomas Hagan), Norman 3X Butler (Muhammad Aziz) and Thomas 15X Johnson (Khalil Islam) got blamed for the assassination of the former Nation of Islam leader and many left it at that.

Although many knew of the FBI’s alleged involvement with the assassination, the Netflix docuseries claims that the late William Bradley of Newark, N.J. fired the fatal shot with a sawed off shotgun, not two of the men convicted of the actual assassination.

Evidence shows that Malcolm X succumbed to the shotgun blasts, and the not the bullets from pistols.

As a matter of fact, Butler and Johnson were not even in the Audubon Ballroom in Harlem, N.Y. the day of the assassination, according to the docuseries.

However, the New York Times has refuted Abdur-Rahman Muhammad’s (the man behind the Netflix docuseries) research saying that there is archival footage that shows Butler at the scene of the crime on that fateful day.

Butler said that Malcolm X’s followers would have never let him anywhere near the Audubon Ballroom because everyone in New York knew the two had beef.

That is why many always believed that no Black Muslim from New York could have carried out the assassination without being noticed by the followers of Malcolm X.

Hayer confessed to his role in the assassination but said that Johnson and Norman were totally innocent.

He later named four co-conspirators, including Bradley, who participated in the assassination on Feb. 21, 1965.

So who was William Bradley, also known as Al-Mustafa Shabazz, after all?

Muhammad uncovered that Bradley/Shabazz had a history of run-ins with the law.

His crimes ranged from aggravated assault to making a terroristic threat.

Coming up in Newark, N.J., locals knew Bradley as a baseball star at Southside High School.

The school now goes by the name of Malcolm X Shabazz High School.

Bradley/Shabazz allegedly held up a bank in Livingston, N.J. in April 1968.

His two-defendants received convictions, but charges against Bradley/Shabazz got dropped.

Bradley/Shabazz’s ability to escape prosecution for some crimes led many to think that he worked as an FBI informant.

His dark complexion and stocky build even fit the description given to authorities by some witnesses to Malcolm X’s assassination.

In an older FBI document, the description of the shooter that fit Bradley was used.

However, as time went on, this physical description got omitted.

Instead, police arrested Johnson as one of the assassins despite the fact that he was very light-skinned.

Despite getting away with his alleged involvement in the Malcolm X assassination, Shabazz still had a reputation of breaking the law.

According to Cinemaholic, “However, Shabazz soon saw the inside of a prison cell, when he was sent away on conspiracy charges from 1977 to 1980. He was thrown in jail again, in 1984, after threatening to kill an East Orange cop, raping a woman and dealing drugs. By the time he got out of prison in 1998, he had a reputation of being a Newark enforcer who was not to be trifled with.”

By several accounts, Bradley/Shabazz made a complete 180-degree turn in his life after spending time behind bars, eventually working as a well-known community activist.

He even appeared in an old 2010 campaign video for Newark’s former Mayor Cory Booker, now a United States senator.

Senator Booker even made a run for the White House in 2020.

In the “Who Killed Malcolm X?” docuseries, Booker said that he knew Shabazz, but did not know of the murder allegations.

He lived in a gated community, drove a Mercedes Benz and owned a boxing gym called First Class Championship Gym.

Although legend has always said that Malcolm X’s assassins came from Newark N.J.’s Mosque 25, Shabazz always denied his involvement in the murder.

Shabazz said, “It’s an accusation. They never spoke to me. They just accused me of something I didn’t do.”

Kelly, Shabazz’s wife, said that her husband had nothing to do with the 1965 assassination of the former Nation of Islam minister.

She said that people only wanted to make her husband a scapegoat for the assassination.

But while some have questioned Muhammad’s work and reliability in the docuseries, “Who Killed Malcolm X?” well-respected historian, the late Manning Marable also believed that Shabazz assassinated Malcolm X.

Marable wrote the book, “Malcolm X: A Life of Reinvention.”

Other respected researchers and historians believe that Shabazz played a role in the assassination of Malcolm X as well.

Regardless, a new investigation into the assassination might clear things up for history’s sake after a lackluster investigation 55 years ago.

The Innocence Project will handle the reopened case with attorney David B. Shanies.

They insist that Aziz, 81, is innocent of killing Malcolm X.

“We are grateful that District Attorney Vance quickly agreed to conduct a review of the conviction of Muhammad Aziz,” said Barry Scheck, co-founder of the Innocence Project, in a statement.

Islam died in 2009 but always maintained his innocence.

Back then, Hayer’s affidavit, testifying to who committed the crime with him, got ignored.

The NYPD basically provided no security on the day of Malcolm X’s assassination despite numerous threats to his life and the bombing of his home in Queens, N.Y.