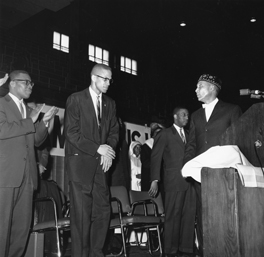 The Honorable Elijah Muhammad (right), founder and head of the Nation of Islam, is shown at a lecture in Chicago introducing Malcolm X (center) on Feb. 21, 1961 (Photo Credit: AP Photo/Paul Cannon).

Unreached potential is something that many have seen too often.

No matter how much times flies, it is still hard to come to grips with what could have been if some people had lived long enough to fulfill their total purpose.

In sports we have seen it with Len Bias, Ben Wilson, Hank Gathers and Ernie Davis.

And in entertainment we have seen it with Tupac Shakur, Sam Cooke and Donny Hathaway.

But none had the leadership skills, charisma, intelligence and love for his community quite like Nation of Islam (NOI) preacher Malcolm X.

At the time of his death on Feb. 21, 1965, the Black Nationalist leader born Malcolm Little had experienced an epiphany about race relations while on a hajj (pilgrimage) to Mecca.

He had begun to embrace fundamental Islam, distancing himself from some of the teachings of The Honorable Elijah Muhammad.

He had begun working with the United Nations on the plight of African-Americans and Africans as a whole.

He had even reached out to Coretta Scott King about participating in voting rights demonstrations in Selma, Ala. with her husband Martin Luther King, Jr.

However, before he could make his biggest impact on society, assassin’s bullets at the Audubon Ballroom in Harlem, N.Y, snuffed him out.

His assassination did not stop his impact or popularity when it comes to Black pride and self-reliance, but the burning question is how much more could he have accomplished if he lived longer than 39 years?

“I believe Malcolm would have had a tremendous impact (on the United Nations) because it was he who was leading the charge,” said Michael McLaughlin, an expert on Malcolm X.  “It was Malcolm X who announced proudly, boldly that he was going to the U.N. relating to America’s treatment of African-Americans.  He was openly speaking with heads of African countries about such and seeking their support.”

Despite being barred by Muhammad and the Nation of Islam from speaking on politics and civil rights, Malcolm’s innate leadership traits could hardly allow him to stand silent on the sidelines during the Civil Rights Movement.

Though he did not support King’s nonviolent tactics or believe that integration was a real possibility according to the late historian Manning Marable (“Malcolm X: A Life of Reinvention”) he wanted to work with King in Selma on voting rights and had even been invited there by the Student Nonviolent Coordinating Committee.

According to King, “During his visit to Selma, he spoke at length to my wife Coretta about his personal struggles and expressed an interest in working more closely with the nonviolent movement, but he was not yet able to renounce violence and overcome the bitterness which life had invested in him.  There were also indications of an interest in politics as a way of dealing with the problems of the Negro.”

Though King did not support all of Malcolm X’s stances on race relations, he understood how extreme racism and bigotry could lead one to believe that self-defense was more practical than nonviolence.

“A man who lived under the torment of knowledge of the rape of his grandmother and murder of his father under the conditions of the present social order, does not readily accept the social order or seek to integrate into it,” he said in “The Autobiography of Martin Luther King, Jr.”

“And so Malcolm was forced to live and die as an outsider, a victim of the violence that pawned him, and which he courted through his brief but promising life.”

King would later say, “I met Malcolm X once in Washington, but circumstances didn’t enable me to talk with him for more than a minute” but that he would have never invited Malcolm X to participate in the Selma movement according to his autobiography.

That promise that King spoke of was evident in his earlier days as his charisma took the Nation of Islam from a small religious sect to a very large one, which still thrives today.

However, when Malcolm X began distancing himself from Muhammad’s teaching, instead choosing to embrace traditional Islam some followers left the Nation with him.

With the formation of his new organization Muslim Mosque Inc. and allegations he leveled against Muhammad for sexual improprieties, would the popularity of the Nation have diminished without his leadership?

“It’s hard to quantify that,” said McLaughlin.  “When Malcolm did leave the Nation of Islam, many members did leave with him.  That’s understandable.  He was the most visible face of the NOI.  He was the national spokesperson until his suspension, the number two guy, so many people identified with Malcolm and possibly even joined because of him.

“On the flip side, most of the members of the NOI remained in the movement after Malcolm’s departure, including most of his own family!”

However, there is very little argument on the type of influence Malcolm X had around the world, even to those not affiliated with the Nation of Islam.

“Malcolm had a great impact on Stokely Carmichael and others in the Black Panther Party and the Liberation Movement,” said Marlon Smith, founder/CEO of Black Greeks Speak Social Justice and Human Rights Council.

“Malcolm helped us rethink the notion of Black heroic images as the leading guide for Black liberation movement.  Huey Newton and Stokely Carmichael are great examples of this impact.”

And 50 years after his assassination he is still seen as one of many Black heroes.

And it is almost a guarantee that his heroism would have reached greater heights if his work had not been cut so short.