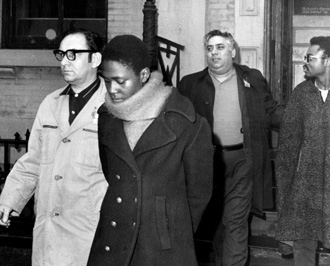 Lumumba Abdul Shakur (right) and his wife Afeni (center), are escorted from the Elizabeth Street Police Station in New York on April 3, 1969 after their arrest in connection with a plot to bomb five Manhattan department stores.  Shakur and his wife were among a group of more than a dozen members of the Black Panther group arrested in the alleged bomb plot (Photo Credit: AP Photo).

Parents always raise their children to do more than them in life and reach more people.

For the Shakur family, iconic status is etched in stone for at least two generations of revolutionary thinkers.

Late rapper Tupac’s mother Afeni Shakur died May 3 reportedly of heart failure at the age of 69.

Tupac is arguably the most important figure in hip-hop history.

But his mother Afeni Shakur is a huge figure in Black history as a whole.

And while people will always remember her when Tupac’s song “Dear Mama” plays, in death it is important to realize that Afeni Shakur was much more than just a mother to a rapper.  She was also a mother to the Black Power Movement via the Black Panther Party.

“We are deeply saddened by the untimely passing of Afeni Shakur,” Tupac’s estate said in a statement.  “Afeni embodies strength, resilience, wisdom and love.  She was a pioneer for social change and was committed to building a more peaceful world.  An outspoken and eloquent advocate for today’s youth, Afeni founded the Tupac Amaru Shakur Foundation to instill a sense of freedom of expression through the arts.”

Although Afeni was not an artist, she gained the freedom to express her anger at White supremacy through her involvement with the Black Panther Party.

According to Encyoclopedia.com, she joined the Panthers in 1964 after meeting an associate of Malcolm X who was recruiting youth from The Bronx, N.Y.

She once told biographer/actress Jasmine Guy that the Panthers “took my rage and channeled it.  They educated my mind and gave me direction.”

The young activist, born Alice Faye Williams on Jan. 10, 1947 in Lumberton, N.C., began writing articles for the “Panther Post” newspaper, which were responsible for misinforming the FBI on the status of the Movement.

Her articles gave the impression that the Black Panthers were losing popularity within the Black community when the opposite was true at the time.

“Shakur and 20 fellow Panthers were arrested on April 2, 1969, and charged with several counts of conspiracy to bomb police stations, department stores, and other public places in New York City.  Shakur was released on bail in the fall of 1970 and became pregnant [with Tupac] by New Jersey truck driver William Garland.  Shortly thereafter, Shakur’s bail was revoked, and she was returned to jail to await trial,” according to Encyoclopedia.com.

Against the wishes of the other Panther 21 defendants, Afeni Shakur defended herself in the five-month trial.  In her cross-examination of undercover detective Ralph White, she performed on the level of a seasoned attorney and won the case.

Along the way, she earned the admiration of fellow wrongfully accused Black revolutionaries like Angela Davis and Assata Shakur.

She brought to light that many Black revolutionaries were framed for crimes they did not commit because of fear of their political ideologies.

Despite her strength, she was not without her flaws.

However, the mother-son bond became even thicker after she kicked addiction and he became one of the most successful rappers in hip-hop history.

A biopic on her son entitled “All Eyez on Me” is currently in production.

Although more people might know her son’s name than hers, her strength to overcome a dysfunctional home (her father was physically abusive towards her mother) as a child, racism and addiction shows just where her son got his strength and his revolutionary spirit.

To quote “Dear Mama,” Afeni Shakur you are appreciated.