How Would Martin, Malcolm View Modern Black Men in America? 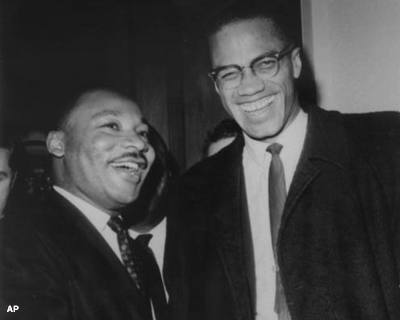 Martin Luther King, Jr. and Malcolm X would realize their dream of Black men succeeding by any means necessary is far from reality (Photo courtesy of AP).

What Would Martin and Malcolm Say?

Today’s Black man has come a long way from 60 years ago.

Sixty years ago, the average Black man made about $4,768 a year, few were able to go to college or even legally be allowed to attend, and they lived in a world of constant struggle with their families.

Today, these are not strongholds for Black men in America. Today, they live in a world where possibilities are endless including being president of the United States.

Two people who helped make this possible were Martin Luther King, Jr. and Malcolm X. During the Civil Rights Movement, it was because of their endless efforts and struggle that helped Black men overcome. But did they overcome in the way they envisioned them to?

King and Malcolm X had a dream that by any means necessary Black men would rise up and take their rightful position in the country their great-grandfathers helped build.

“I think Martin and Malcolm would be proud of 37 percent of the Black men in America,” says Eric. “The other 63 percent would make them ashamed. Most Black men in America care more about looking good and having fly things instead of being fathers and providers to their kids…

“I feel they would say Black men in prison are selfish for committing crimes and being in jail instead of raising their kids to be a productive member of society and show their kids how to survive in this world. I know they would both feel this way because they both wanted equality for Black men in America and they would want Black men to stand up and be leaders.”

There were many Black men who tried to take the torch after the deaths of King and Malcolm, but their impact was nowhere near the same. What was the problem with the leaders that came after them?

“None of them were ever a true unifying leader,” replies Jeralan. “Jesse Jackson and Louis Farrakhan just didn’t do it and I believe they would be disappointed in them because they were their followers. I also feel Martin and Malcolm would think the Black men in America lack that strong sense of having to earn what they get.

“Many Black men see their place in life as an excuse to request more than what they actually worked for. I think the only thing the two men would be proud of us for is that we do live quite confident.”

“I believe it’s split. We have some men doing great things and the others doing horrible,” states Cacilie. “We have President Obama or men like Magic Johnson who are making moves and creating jobs for minorities. However, I think they would be in between bittersweet, proud, and disappointed because most Black men in America will not step up and take advantage of all the opportunities (that) have given to them, that these two men worked hard for them to have.

“I think they would be proud of hip-hop moguls because they are examples of how Black men in America can make their dream a reality. Although I think they would disagree with the sagging pants, they would still be proud because (they) have become pioneers and self-made millionaires.”

That is one area where Black men have achieved well in, the entertainment industry. Could King and Malcolm X look past the talk about sex, drugs, and money and see it as just entertainment?

“No way,” Sam chimes in, “I believe Malcolm X would be disappointed with all the derogatory rap/hip-hop music (and those continuing to support and/or make that type of music). He would be unsatisfied with the amount of Black men in prison, and definitely ashamed of those having children out of wedlock (several baby mothers) not taking responsibility for their children.

“I think their opinions would be similar in most case scenarios with the exception of religious views. I think Martin Luther King would be impressed with the men who stay away from violence, and he would be most impressed with those sincere about Christian leadership. Overall, he would be satisfied with today’s men who are pursuing higher education.”

Education was supposed to be the key for Black people to gain freedom. During the Civil Rights Movement they believed this so much that many went to jail and some even died so later generations would be educated and be able to take the Black community further.

Half of their dream came true because today many Black men are educated, but our community has not come so far.

Education is more an individual success. We don’t come together as a whole like they did 60 plus years ago, so does going to college makes us better as a whole? Are we better?

“No,” replies Joe. “The sad thing is MLK and Malcolm wouldn’t be able to find our strong points as a whole. The only thing they would feel good about is that Black men in America are more educated than 60 years ago. The youth don’t have any direction anymore. There are no more leaders.

“Back then, men sought out the church and pastors for help in (a) problematic situation. That’s rare these days. We did good getting a street named after Martin Luther King in almost every city, but MLK would be embarrassed and hurt to see what happens on those streets. Martin Luther King stood for non-violence, but on his streets there is violence going on against Blacks by other Blacks. That was for the most part unheard of years ago, but a man in jail for violence is the norm now.”

Black men in America’s number one stronghold is prison. Black men make up the most percentage of inmates than any other race. Are these men unaware of the sacrifice these martyrs made for them or do they just not care?

“Yes, I have been locked up. Yes, I have been involved in illegal activities, and I still hang out with my boys who do,” says one man. “Malcolm X believed that by any means necessary and that’s what I had to resort to, to take care of myself and my daughter. I know it was wrong and I understand what they fought for, but I think they would feel not as bad about the men in prison like everybody thinks.

“I think they would understand our plight. Some of us are still oppressed. I was born with a lot of strikes against me. That lifestyle was all I knew and the only way, at the time, I knew how to survive. I get that they fought for us, but a lot of us still have to fight everyday.”

If King and Malcolm X were able to communicate with the Black men in America, they would probably say unity is the key. This is what they were saying years ago and today’s Black man still doesn’t know the meaning of the word unity.

It’s time to be leaders in this world and in your home.

It’s time to reach back to our community and teach what you know and inspire our younger generation to be even greater.

It’s time to put down the drugs and the guns and stop killing our people.

These men risked their lives so we wouldn’t have to.

It is time for Black men in America, to just WAKE UP!