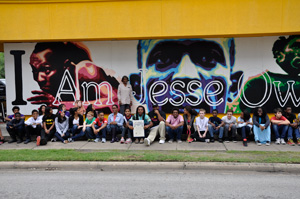 Finding Inspiration from our Heroes

On May 21, students from Houston’s A+ Unlimited Potential (A+UP), a free private middle school, gathered with Houston city leaders to unveil a new mural in honor of Olympic hero Jesse Owens.

The mural, which coincides with upcoming biopics honoring the legacy of the 1936 Olympic track star, is located at The Breakfast Klub, a world-renowned restaurant in Houston’s midtown area.

“When most people think of Jesse Owens they think about his Olympic triumphs and the world records that he set but what many don’t know about Jesse was [an] unyielding commitment towards empowering youth from the inner city,” said Reginald Adams, the artist responsible for helping the students bring this mural to fruition.  “Having local students design and paint the mural pays homage to his great legacy and will serve as inspiration to the local community.”

Like many athletes of the early 20th century, Owens’ triumphs, despite rampant racism, inspired millions to reach for their dreams.

Appropriately, many Houston leaders like City Council member Larry Green, Marcus Davis of The Breakfast Klub and Shekira Dennis encouraged the A+UP students to reach for their dream, no matter how big or small, just like Owens did.

According to the press release, “The son of a sharecropper and grandson of a slave, Jesse Owens’ stunning achievement of winning four gold medals at the 1936 Olympic Games in Berlin, Germany made him an unforgettable part of world history.

“The Games were being held in Nazi Germany, where dictator Adolf Hitler posited that German ‘Aryan’ people were the dominant race.  But the outcome of the Games told another story: Jesse Owens became the first American track and field athlete to win four gold medals in a single Olympiad.

“During a time of deep-rooted segregation, he affirmed that individual excellence—rather than race or nation—distinguishes an individual.  The entire world took note of his remarkable achievement, one which remains without precedent.  His record number of gold medal wins stood for 48 years.”

Now the entire city of Houston, especially its children, can find hope and inspiration when they pass the Jesse Owens mural at The Breakfast Klub, located at 3711 Travis Street.

What the students from A+UP learned the most about Owens was the hard work and steps taken in order to become successful.

“There’s a difference between being a dreamer and being ambitious,” said A+UP principal Cicely Benoit.

Benoit stressed to her students the importance of backwards planning, which will show one the steps needed to become successful.

Steps are now being taken to bring this hero’s story to the big screen.

As a result, children and adults around the world will find inspiration in the 2016 Owens biopic entitled “Race,” starring Stephan James as the Olympic hero.

In addition, Disney is planning an Owens biopic, which will be directed by Antoine Fuqua and Anthony Mackie is nearing a deal with Relativity Studios for a biopic as of March 2015.