February Not Enough to Honor Unsung Heroes of Black History 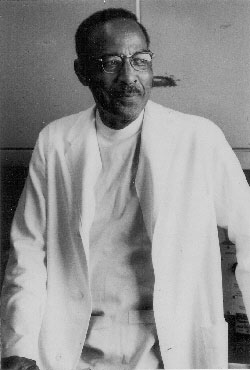 Many unsung heroes, like medical pioneer Vivien Thomas, do not receive proper credit during the short month of February (Photo courtesy of jhu.edu).

Black History Month provides too short a timeframe to reflect on the accomplishments that Blacks have made to the United States and the world.

Many unsung heroes fail to meet the standard for celebration in February that so often spotlights Rev. Dr. Martin Luther King, Jr., Malcolm X and a select group of celebrities and sports legends whose contributions, although noteworthy, represent only a small segment of individuals whose accomplishments and contributions to Black people and the world were remarkable.

Regal Magazine is extending the recognition of Black History beyond the designated month to showcase a few unsung heroes in the hope that interest in finding out more will be encouraged.

There are those who are fond of spy movies and reading about secret agents. James Armistead is one of America’s unsung heroes who served as a patriotic spy during the American Revolution.

He served the American forces at a time when military intelligence was crucial. Acting as a double agent, he was used by the British, but he provided them false information and used his close contact to glean troop details for the Americans.

Since he was a slave, he had to gain permission to participate in the war and served with Marquis de Lafayette and was able to gain access to information from the British that Lafayette and the American forces, under George Washington, were able to use to weaken the British forces leading to surrender in 1787.

Following the war, Lafayette advocated to help Armistead gain his freedom which Virginia was reluctant to provide despite Armistead’s contribution to the war effort.  He gained his freedom and lived out his life as a gentleman farmer in Virginia.

From spy games to medical pioneers, with Dr. Rebecca Lee Crumpler and Vivien Thomas, who overcame significant obstacles to leave a lasting mark on the medical profession and yet remain largely unsung.

Crumpler, who was born in 1831 in Massachusetts, spent much of her early years assisting ailing neighbors who were under the care of her aunt.

During Crumpler’s time, there was no medical care for poor Blacks and often they died from their living conditions. There was no attention placed on their care and well-being except for that provided by others in the community so she worked as a nurse from 1852 to 1860.

However, due to the heavy demands for medical care for Civil War veterans, the opportunities for women physicians increased. This opened the door for her to further her knowledge and pursue a medical degree.

Crumpler earned her M.D. in 1864 from the New England Female Medical College making her the first African American woman to receive that honor in the United States.

Following the Civil War, Crumpler moved to Richmond, Va. where she not only serviced the needs of the newly freed slaves, she continued her efforts to assist the poor and needy, thereby setting a standard for assisting the underserved in the community that still exists today.

In 2004, HBO showcased a film entitled Something The Lord Made about Vivien Thomas, whose early aspirations to become a doctor were dashed, as he was forced to became a janitor working for a renowned White surgeon, Dr. Alfred Blaylock.

Thomas, who was born in 1910, proved to be very knowledgeable and Blaylock made Thomas his surgical assistant and they worked together on many medical challenges of the day.

When a position for Blaylock came up at Johns Hopkins Hospital in Baltimore, he brought Thomas with him because of the immeasurable, and largely un-credited, assistance Thomas provided.

Despite not being able to operate on a White patient himself due to the prejudices of the 1940s, Thomas was able to participate in surgical procedures often by standing beside Blaylock.

Thomas ultimately was the first African American without a doctorate degree to perform open heart surgery on a White patient in the United States.

He is also credited with addressing the blue baby syndrome in the 1940s that was killing babies prematurely. Thomas’ surgical methods and teaching practices educated surgeons worldwide.

Now, from the area of law enforcement, Regal Magazine highlights another one of America’s unsung heroes whose tenacity proved to be vital in bringing down a major crime boss.

Eunice Hunton Carter is an unsung hero (“she-ro”) of the 20th century as a crime buster during the Prohibition Era.

Carter was born in Atlanta to parents who were community activists in their own right.  She became a social worker and earned a law degree from the Fordham University Law School in New York, becoming the first African American woman to receive a law degree from that institution.

Carter’s investigative work began with women’s issues and in petty crimes in the area of prostitution in the 1930s.

During her efforts as an Assistant District Attorney, working with then special prosecutor Thomas E. Dewey, Carter uncovered a connection being made between petty crimes, such as prostitution, and racketeering.

This brought together a pattern that law enforcement could use to connect smaller crimes with larger offenses and generate cases that could effectively dismantle organized crime.

From a patriotic spy during the revolutionary war to 19th and 20th century medical pioneers and a crime busting activist during Prohibition, Blacks in America have a rich legacy of unsung heroes that deserve attention and admiration.