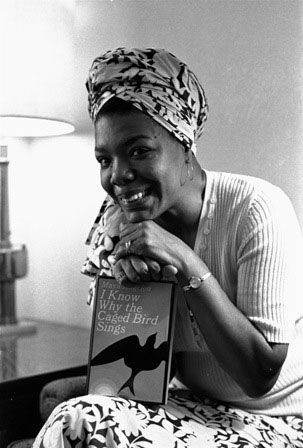 In 1969, Maya Angelou became the first Black woman to have a work of nonfiction on the bestseller list (Photo Credit: AP Photo/STF).

When news broke on Wednesday morning that the world had lost the legendary Maya Angelou, former Essence Magazine executive Susan L. Taylor stated that the great writer had stretched what God had given her.

Her rise to the top may have been unlikely, but as Taylor stated, the Holy Spirit had given her an assignment to speak the truth to the masses, and she did that and more exquisitely from dancing, to writing plays and screenplays to her incomparable poetry.

The writer and activist born Marguerite Johnson on April 4, 1928 in St. Louis represented the forgotten and overlooked segment of society for her entire 86 years on the planet.  But as she so eloquently wrote, and still she rose.

A female growing up in the early 20th century was not supposed to rub elbows with Civil Rights leaders and eventually presidents.

Little Black girls were supposed to be inferior.  They were simply on Earth for the amusement and abuse of men like her mother’s boyfriend who raped her when she was 7-years-old.

Black Americans were not supposed to be educated and articulate enough to spearhead a movement for equal rights, but there she was alongside Martin Luther King, Jr. and Malcolm X changing the course of America forever.

Maya Angelou’s life represented what the poor, downtrodden and forgotten truly could accomplish if given the proper platform.

She was the voice for multiple voiceless demographic groups in the same vein as King or Malcolm X.

Maya Angelou represented the true beauty of women.  In essence she was the epitome of a renaissance woman.  She was a truth teller regardless of how much the truth hurt.

“She told a story that wasn’t allowed to be told,” said author Tayari Jones.  “Now, people tell all sorts of things in memoir, but when she told the truth, she challenged a taboo—not for shock value, but to heal us.”

A devout Christian, Maya Angelou embodied the verse (Matthew 20:16), “So the last will be first, and the first last.  For many are called, but few chosen.”

According to “The African American Encyclopedia,” after her parents divorced she was left in the care of her grandparents in Stamps, Ark.

She attended segregated schools, later moving to St. Louis with her maternal grandparents.

After being raped as a child she became silent for years, writing her thoughts on a notepad that she kept with her.

Despite the heartache, abuse and hardships, she eventually became the first female streetcar conductor in San Francisco.

Her memoir “I Know Why the Caged Bird Sings” became the first nonfiction bestseller by a Black female author.

She also became the first Black woman in the Directors Guild of America.

Maya Angelou was truly THE regal queen.  She represented not only the hope of the slave, but also the legacy of the queens of Africa.

She was the visual representation of what young African American girls, and all girls, could accomplish if they are given a voice, a platform and an equal chance to make a difference in society.

Angelo once told Taylor, if I can’t be used then I am useless.

Her life was a true testimony of what God can do for those who allow Him to use them.  He literally took the mute and made her the voice of an era.

Although that era is now officially over unfortunately, Maya Angelou’s voice is needed even more now.

Young girls should know that even if men who see you as just a sex object abuse you, you are so much more than that.

Angelou showed Black entertainers that although they have talent, they are not just objects used for entertainment purposes.

And she showed Christians that although they have a Savior that does not mean they do not stumble and hurt because of life’s obstacles.

Like many others she made youthful mistakes like becoming involved with prostitution and exotic dancing as a young lady, but she showed that someone’s mistakes did not have to define them in a negative way.  Those mistakes could eventually become one’s calling life and allow one to reach people living in the margins of society.

Those realities helped her touch some many young women because she was imperfect.

Christians often say that God does not call the qualified; He qualifies those that are called.

Maya Angelou answered His call time after time and allowed her life to be used to uplift others.

She wrote in her book “Letters to My Daughter” to “Be a rainbow in someone else’s cloud.”

We are all blessed that we were able to learn from the wisdom that she possessed, and we are even more blessed to see her lifted up to her eternal resting place with all of God’s faithful servants.