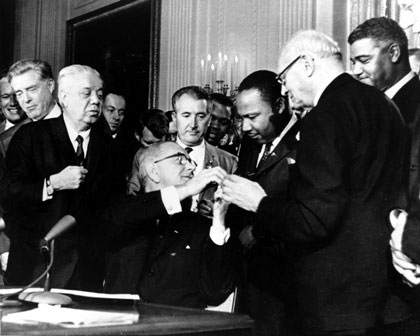 President Lyndon B. Johnson shakes Martin Luther King, Jr.’s hand after presenting him with one of the 72 pens used to sign the Civil Rights Act as congressmen and Whitney Young, executive director of the Urban League, look on (Photo Credit: AP Photo).

During Black History Month we often stop to remember the Civil Rights era in American history.

The years between 1955 and 1968 saw a massive push by African Americans to change the physical freedom they had acquired after emancipation into real equality as citizens.

While the entire era was very important, 1964 was one of the most charged and productive years of all.

So, 50 years later in 2014, people across the nation are looking back at the achievements of that year.

Here are the top five accomplishments of 1964 and responses to them today.
1. The Civil Rights Act of 1964 was a major win during the Civil Rights era. It outlawed racial discrimination in education and in the workplace, and put a stop to discriminatory voter registration requirements around the country.

“In the 60s, we were moving forward,” said Mary Perry, President Emeritus of the Wendell Branch of the NAACP in North Carolina. “We are regressing back to the 60s now. We are moving backwards as a people,” she said pointing to new voter registration laws across the South and reports by MSNBC that schools are now as segregated as they were before being desegregated by the Civil Rights Act of 1964.

2. 1964 Mississippi Freedom Summer: For this campaign, hundreds of members of the Student Nonviolent Coordinating Committee, the Southern Christian Leadership Conference, the Congress of Racial Equality and the NAACP converged in Mississippi to register voters and raise awareness about voter disenfranchisement in the state.

Four of the volunteers were killed and one year later the Voting Rights Act of 1965 was passed.

In 2013, section four of the Voting Rights Act was slashed by Congress, and Mississippi and other Southern states saw a return to the voting rights violations that the freedom summer organized against.

Organizers from around the country now plan to convene in Mississippi again for Freedom Summer 2014 to fight for the same freedom to vote.

3. Harlem Riots of 1964: In July 1964, NYPD Lieutenant Thomas Gilligan shot and killed 15-year-old James Powell in front of his friends in Harlem, N.Y.

The shooting spurred six nights of riots in Harlem and later Bedford-Stuyvesant, Brooklyn.

4. In 1964, Malcolm X broke from the Nation of Islam, and announced his desire to work with the leaders of the Civil Rights Movement.

From then on Malcolm X and the Organization of Afro-American Unity countered Martin Luther King’s calls for non-violence within the Civil Rights Movement with calls for the Black community to defend itself in the face of a racist government.

“If we don’t do something real soon, I think you’ll have to agree that we’re going to be forced either to use the ballot or the bullet. It’s one or the other in 1964. It isn’t that time is running out — time has run out,” said Malcolm X in his 1964 “Ballot or the Bullet” speech.

This year, civil rights organizers began to look to the international stage as Malcolm X wanted.

Organizers at the HKonJ Moral March in North Carolina began calling their protest a human rights issue rather than a civil rights one and the NAACP brought voter disenfranchisement issues in the United Stated to the United Nations.

At 35 years old he was the youngest man to ever win the prize and the award sent a message to the international community that the non-violent Civil Rights Movement in the United States was of international significance.

“Conclude that this award which I receive on behalf of that movement is a profound recognition that nonviolence is the answer to the crucial political and moral question of our time,” said King in his acceptance speech.

King donated the $54,123 he won for the prize to the Civil Rights Movement, allowing for many new programs and initiatives to develop and grow.