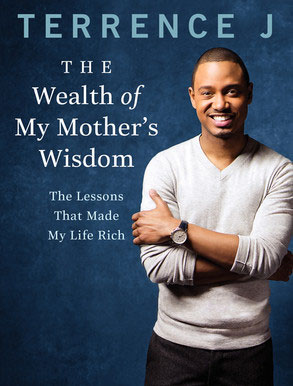 Terrence J’s New Book Offers Advice for Us All

As a reporter who usually reports on social justice issues, running after protests and calling up families who have lost their sons to police violence, I was worried Terrence J’s new book would have nothing for me.

On Oct. 2, the former host of BET’s “106 & Park” and “Think Like a Man” actor released his new book, The Wealth of My Mother’s Wisdom: The Lessons That Made My Life Rich.

Speaking to journalists earlier this month, Terrence J said he first started getting to know his mother as an adult in preparation for his role as the doting son in “Think Like a Man.”

In hearing her stories, he said he realized that while it sometimes felt like she told him the “same cookie cutter things over and over,” she was actually “planting seeds that later on in my life came forward.”

However, the serious journalist in me questioned whether the actor could really give me life advice to live by.

But in his memoir, Terrence J finds the one thing that makes any book worthwhile; a good story. Or good stories, I should say. He offers up his mothers and his own, life events and decisions as advice, helping us to learn, as they did, through experience.

While Terrence J reiterates, maybe one too many times, the idea that his mom’s life decisions paved the way for his own success, each story is an interesting look into the all too familiar life of a Black single mother raising a young man. And beyond that, the effect those decisions have on that man as an adult.

In his book Terrence J said, “young men, especially, are distracted these days” and showed how hard he and his mother were forced to work, growing up in drug riddled New York City and then trying to fit in as a “Yankee” in North Carolina.

The book is written for Tiffany, a teenage mother he mentors in New York, but his tales of his mother choosing who was in her life, sometimes failing and working hard to restart, protecting her family all the while following her dreams, really hit home.

Top five lessons from Terrence J (and his mother):

3.     Try your best to have real life interactions (outside of social media)

4.     It is better to “have a small group of friends you can count on, than a lot of friends that aren’t good for anything.”

5.     Your mother’s wisdom has more to tell you about being a man than you may think.