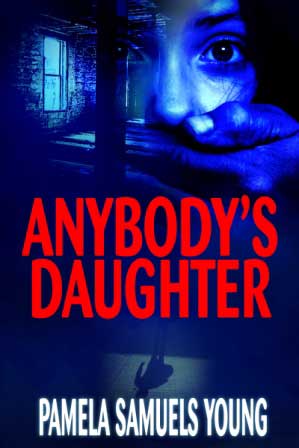 When you mix advanced technology, abductions in broad daylight, a million dollar industry, and page-turning drama all rolled up into one, you get an explosive read that will take most through unknown territory.

In the novel “Anybody’s Daughter,” Pamela Samuels Young’s ability to use imagery paints such a vivid picture for the reader that one could actually visualize the events unfolding before their eyes.

Brianna Walker is a 13-year old girl that returns to live with her mother.

Unbeknownst to her mother, who is very strict and keeps her on a tight leash, Brianna has a new boyfriend whom she met online.  The picture-perfect relationship she thinks she has isn’t at all as it seems.

When Brianna comes up missing and it is learned that she may have run off with her new boyfriend, her Uncle “Dre” feels partially responsible and is determined to do whatever it takes to get her back, despite his past criminal record.

The family’s nightmare truly begins when they realize that Brianna may have become a victim of human sex trafficking.

When “Dre” comes to the realization that the law and the media are not empathic to the plight of missing/kidnapped African American children, he decides to take matters into his own hands.

“Dre” uses all of his resources and the help of a lawyer-friend to burst this operation wide open.

If one believes that they are aware of what goes on in the world of human trafficking, think again.

Samuels Young doesn’t just scrape the surface of this topic, she digs deeper into the layers and exposes information that would even make the strong cringe.

Unfortunately, this is one of those books that leave you hoping and thinking for more.

This novel is by no means predictable.

For some, it may be too graphic and detailed for them to handle.

The author is also able to silently, but brilliantly tap into sex-trafficking not being just a female issue. It is a truly an eye-opening, educational read.

“Anybody’s Daughter” takes you through the day-to-day life of what a human sex trafficking victim has to go through.

The characters feel like everyday people you know and care for.

“Anybody’s Daughter” should be read by anyone not familiar with human sex trafficking, educators, and by anyone who knows and comes into contact with young girls.

Readers should also walk away wanting to help or make a difference so an end can be put to this growing epidemic. This is a must-read, and will hopefully make one want to be more involved and take action.

The book “Anybody’s Daughter” shows that this harsh circumstance could truly be the reality for anybody’s daughter.