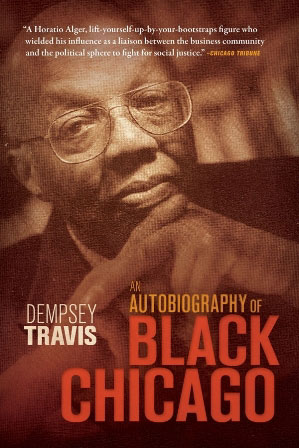 A Work of Art

If  “An Autobiography of Black Chicago” by Dempsey Travis could be summed up in one phrase it would be, “Chicago at its finest for Black America.”

It takes you deep in Chicago within the community of Bronzeville; how Black businesses thrived, the nightlife with clubs, the theaters and other types of entertainment.

Some familiar names that are mentioned in his book that also grew up in his community are Redd Foxx, Nat King Cole and Harold Washington.

Although the book celebrates many of the accomplishments of Black Chicago, it also shows how Chicago dealt with many issues of discrimination as well.

An interesting fact about this book was that it was published five times.

Its first publication date was in 1981.

Could this be because the author had issues putting it together?  Travis struggled with his reading abilities and considered it a huge challenge.

Although this was a huge obstacle, he applied himself, completed college and became a successful businessman.

Travis knew that in order to be a success, it was important to study and work hard in areas that needed strengthening.

It is even stated in his book that he would read from 10 different newspapers on a daily basis.

Some would say that practice makes perfect. If this is true, then “An Autobiography of Black Chicago” is truly a work of art.

In “An Autobiography of Black Chicago,” Travis chronicles what went on from the early 1920s to 1981.

Surprisingly, if one believes that the Jim Crow days only took place in the South, Travis makes it clear that during the 20th century, Chicago had its fair share of racism as well.

White people ran most of the well-established businesses during that era.

During this time, Blacks were limited to undesirable low-paying jobs such as working in factories.

It was difficult for them to establish credit and to rent or own property.

Travis’ mission was to change this for himself and for other African Americans.

Travis’ book doesn’t just discuss his exposure to Chicago. This book also shares with his readers how he was active in national businesses, professional and civil rights organizations, and how he eventually became an advisor to several presidents.

Travis also discusses how he was greatly shaped by a childhood trip to a funeral in Kentucky, and his experiences in a racially segregated military during World War II.

“An Autobiography of Black Chicago” is a classic story that shouldn’t be categorized in a certain genre.

“An Autobiography of Black Chicago” is a book about celebration of life.

It is a book about what can happen to a person when they work hard and do not become a victim to naysayers.

This book is a beautifully written story about a man who came to be one of the most prominent and powerful men in Chicago.