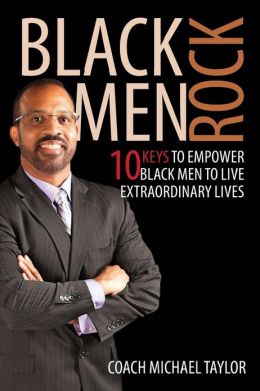 Transforming the Lives of Black Men

Coach Michael Taylor is back with his latest book, Black Men Rock:10 Keys to Empowering Black Men to Live Extraordinary Lives, which addresses issues holding back African American men from reaching their full potential in their communities and personal lives.

Black Men Rock is written to assist Black men in their personal journey by encouraging them to dream big and to believe everything is possible, despite the circumstances or negative teachings that may have been passed down through multiple generations.

Taylor encourages every Black man to accept the truth about who they are, providing helpful keys and adopting the mindset that being Black does not put them at a disadvantage.

The author of Black Men Rock recalls his personal experiences, sharing intimate stories readers can relate to about his adolescent years.

Growing up in the inner city projects of Corpus Christi, Texas and raised by a single mother of six, Taylor was eventually forced to live with his grandparents.

While living there, he suffered both verbal and physical abuse from his grandmother, but also became very fond of his grandfather and elementary school teacher, Mrs. Bussey.

She showered him with love, causing him to excel academically while his grandfather taught him to “play the hand you were dealt,” which brought him new understanding, and empowered him to overcome many obstacles in his life.

Embracing those words changed his mindset. He recognizes racism and discrimination still exists, but feels inspired because of all the things he’s seen Blacks accomplish in this country in spite of it.

Taylor offers 10 keys to prospering and overcoming stereotypes that Blacks are often associated with.

He stresses the need to know yourself, and about how important it is getting in touch with your spirituality.

“Your vision is between you and God,” Taylor said. “If you have a dream, meditate on it and it will come to you how to attain that dream through your heart.”

Taylor also added that we are not really chasing a dream, but are merely being built by the dream, which means that God sometimes uses dreams to transform us into the person we were meant to be if we are willing to trust the process.

Black Men Rock also teaches readers how to overcome the trials and tribulations that stand in the way of our dreams.

Furthermore, Taylor urges the reader to make relationships a top priority, to take care of your physical body, to better manage your finances, to serve your community and to embrace technology.

One of the more notable emphasis of Black Men Rock deals with self-perception and the media’s perception of Black men.

According to Taylor, the media portrays Blacks as being poor, uneducated, unmotivated and a burden to society.

He backs this up by opening up and sharing his personal stories of racism, depression, and financial woes that illustrates to the reader exactly how he felt at the time, and how the media played a role in molding people’s perception around him during those critical times.

Taylor thinks that it’s time for Blacks to stop carrying the burden of the civil rights era mentality, and thinks the future is very bright for African Americans.

The author of Black Men Rock gives great insight by providing stories to go along with each key.

He gives a step-by-step guide within each chapter that’s easy to incorporate into one’s daily life.

Taylor uses analogies and great quotes from movies, celebrities and real life situations in order to give readers a better understanding of what’s happening along with his thought process.

He is a life coach that empowers others to live the life of their dreams. And his book Black Men Rock will simply transform lives.