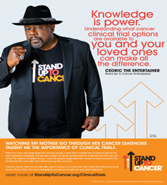 (Photo courtesy of Stand Up To Cancer)

Comedian/actor Cedric the Entertainer does not only have a passion to entertain.

The St. Louis native also has a passion to make a difference as it pertains to people’s health and well-being.

The comedian born Cedric Kyles has teamed up with Stand Up To Cancer (SU2C) for a public service announcement (PSA) that seeks to encourage cancer patients to consider clinical trials as treatment options.

“My mother’s cancer journey taught me about the value of advocating for yourself and knowing your options,” Cedric the Entertainer said. “Participation in cancer clinical trials is extremely low in the Black community, and I am proud to work with Stand Up To Cancer and take action to address the important issue.”

Cedric the Entertainer’s mother Rosetta Boyce Kyles passed away in 2015 after a 2009 diagnosis of uterine cancer.

The comedian and his sister stayed by their mother’s side as she worked with oncologists at St. Mary’s Hospital in Richmond Heights, Mo.

Cedric the Entertainer said, “My sister and I would have our own meetings with the doctors to look at all the treatments and get a clear understanding.”

The actor from the sitcom “The Neighborhood” serves as a Stand Up To Cancer ambassador.

“We have the old, traditional ways in which the disease is treated, but in order for us to really grow, in order for us to understand the disease in many ways, it’s important that people not be afraid of clinical trials,” said Cedric the Entertainer. “It’s important that we get away from the myth that you’re a guinea pig in that situation. It may not feel like the comfortable way, because it’s not something that you know, but doctors and scientists are really trying to figure out ways to help people.”

The PSAs, which launched this month, aim to increase diversity in cancer clinical trials.

The public service announcements will run in print, digital and out-of-home outlets.

“We’re honored Cedric the Entertainer has joined us to raise awareness about the importance and benefits of cancer clinical trials,” said Sung Poblete, Stand Up To Cancer CEO. “The incredible altruism of the entertainment community has helped us advance our goal of delivering more cutting-edge research and resources for cancer patients in diverse communities, who need our support more than ever.”

One fourth of “The Original Kings of Comedy,” Cedric the Entertainer said, “After my mom passed away, I got introduced to this organization. And the partnership was a no-brainer. [Now I’m] spreading the word that we as a culture have to stand up to cancer and say we do want to eradicate it at some point in time in our lifetime, hopefully, and find a real cure for it.”

The hesitancy for many Black people at participating in clinical trials might come from the atrocity known as the Tuskegee Experiment or Tuskegee Study in which Black men were used as guinea pigs for a syphilis study.

The CDC said, “In 1932, the Public Health Service, working with the Tuskegee Institute, began a study to record the natural history of syphilis in hopes of justifying treatment programs for Blacks. It was called the ‘Tuskegee Study of Untreated Syphilis in the Negro Male.’

“The study initially involved 600 Black men—399 with syphilis, 201 who did not have the disease. The study was conducted without the benefit of patients’ informed consent. Researchers told the men they were being treated for ‘bad blood,’ a local term used to describe several ailments, including syphilis, anemia and fatigue.

“In truth, they did not receive the proper treatment needed to cure their illness. In exchange for taking part in the study, the men received free medical exams, free meals, and burial insurance. Although originally projected to last 6 months, the study actually went on for 40 years.”

In the meantime, many of the participants went blind, delirious or died because they did not receive proper treatment for syphilis even though a cure existed.

That is probably why the endorsement of celebrities like Cedric the Entertainer means so much to SU2C.

If a respected celebrity gives an endorsement, maybe more Black Americans will be willing to take part in clinical trials for cancer treatment.

According to the press release, “SU2C’s Health Equity Initiative, announced in January 2020, aims to increase diversity in cancer clinical trials to ensure patients of all racial and ethnic backgrounds benefit equally from the potential of cancer treatments, and that research addresses differences in genetics, metabolism and physiology. Currently, data from the FDA shows only 4 percent of total cancer clinical trial participants are Black, and 5 percent are Hispanic, despite the fact that people of color have the highest mortality rates and shortest overall survival rates for most cancers.”

The co-founders of SU2C are the late Laura Ziskin and the late, Noreen Fraser.

StandUpToCancer.org says, “Cancer clinical trials allow researchers to study innovative and potentially life-saving new treatments. The goal is to find treatment that are better than what’s currently available. Placebos are rarely used in cancer treatment clinical trials. If participants don’t receive the study medication, they are always given the best available treatment for their particular cancer. This helps the researchers determine whether the study medication is better than the standard treatment.”