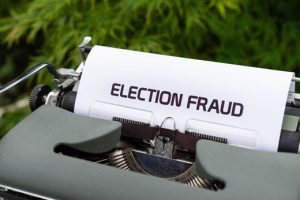 Allegations of election fraud have caused many to doubt the results of the 2020 presidential election while others say the Big Lie threatens America’s democracy.

Many political pundits believe America remains at a crossroad when it comes to the integrity of elections.

Many on the left have accused the Republicans of trying to disenfranchise African-American voters with restrictive voting laws.

Likewise, many on the right have accused the left of stealing the 2020 election from former President Donald Trump because of fraudulent votes, which many courts have dismissed.

Regardless, the trust in American elections seem to be dwindling.

And some have even questioned the future of American democracy after Trump attempted to overturn the legitimate election of President Joe Biden.

However, the often-divided Senate seems to have bipartisan support for reforming the Electoral Count Act (ECA) after Trump, unsuccessfully, tried to get former Vice President Mike Pence and some Republican congressmen to overthrow the 2020 presidential election results instead of certifying the election of President Biden.

A group of senators, both Democrat and Republican, met Jan. 24 via Zoom to discuss reforming the Electoral Count Act of 1887.

Politico reported, “Members of the group are considering updating the 1887 law to clarify that the vice president’s role in overseeing Congress’ certification of election results is ministerial (i.e. they can’t overturn the results).  In addition, the group is looking at potentially raising the threshold for challenging election results. Other ideas for broader elections reform include giving poll workers additional protections from harassment and expanding the use of grants from the Election Assistance Commission, which provides guidance to state and local election officials.”

Business Insider wrote, “The ECA came out of the contested presidential election of 1876 between Democrat Samuel Tilden and Republican Rutherford B. Hayes, which dissolved into a full-on crisis when several states sent multiple slates of presidential electors to Congress. A 15-member commission was tasked with deciding the true winner of the election, and the impasse only ended by Democrats agreeing to accept Hayes as president in exchange for him ending reconstruction in the South. This was a period when the US was addressing slavery and fallout from the Civil War, and Hayes’ move led to the Jim Crow era of racial segregation and oppression.”

Some Republicans from the Senate and House of Representatives have indicated that they might be open to reforming the Electoral Count Act.

Romney said about the possible reform bill, “Some items relate to making sure that election officials are not harassed. Others relate to how elections are certified. Others relate to what the role of the vice president is in the electoral counting process and how you would deal with an objection to a slate of electors. There are long lists from each of us, and we are just now beginning to talk about which of these we’ll find sufficient support to include in a bill.”

Despite many political pundits believing that reforming the Electoral Count Act is imperative to saving America’s democracy, others feel that it is not enough to protect the voting rights of all American citizens.

Alex Tausanovitch, director of campaign finance and election reform at the Center for American Progress, said, “American democracy faces multiple threats—the possibility of interference with the electoral count is just one of them. Just reforming the Electoral Count Act would be like only locking your back door. There’s a broader set of precautions we should take, particularly when something as fundamental as the democratic process is at stake.”

For instance, journalist Li Zhou of Vox wrote that reforming the Electoral Count Act would not prevent election interference or subversion at the state and local level.

If one party had rogue actors at the state or local level, that person could possibly overturn fair elections if they do not get their desired result.

Some believe the controversy only stems from one former politician who has refused to concede defeat, instead repeatedly saying that the election was stolen from him because of widespread election fraud.

He spoke about dead people voting for Biden.

The former president tried to get election officials in battleground states like Georgia and Arizona to throw out legitimate votes because he did not like who those people voted for.

And it took him hours to speak out against the deadly insurrection on Jan. 6, 2021, in which his supporters, falsely believing the Big Lie promoted by Trump and some conservative media outlets, stormed the United States Capitol when Congress was certifying Biden’s victory.

While Trump has still not accepted defeat over a year later and has promoted the Big Lie on speaking tours, many Republicans believe that the mistrust in the voting process began when many people believed that Russian interference caused Secretary Hillary Clinton to lose the 2016 presidential election.

Additionally, many Republicans blame Stacey Abrams of Georgia when she refused to concede to Georgia Gov. Brian Kemp, claiming that Georgia had disenfranchised many African-American voters during her run for the governor’s mansion.