Is Racial Discrimination in the Workplace Rampant or Overblown? 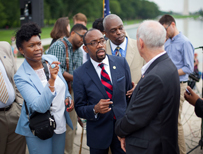 Many African-Americans feel the sting of racial discrimination in the workplace because they are often forced to sell their qualifications to a boss that does not look like them or share their experiences (Photo Credit: AP Photo/Pablo Martinez Monsivais).

From the Mind of an Endless Thinker

The Black Ladder: Racial Discrimination in the Workplace

It is 9 a.m. and he pulls the glass doors open and walks toward the security check in.

The security guard asks him the nature of his visit.  He responds, “I have an interview with Mr. Coleman.”

He signs the visitor log and the security guard points him in the direction of the elevators.

The 15th floor is where he is headed.

As he steps into the elevator he checks his tailored suit making sure it is smooth and perfectly aligned on his shoulders.

He has done this before.  Not at this particular Fortune 500 company but others.

Riding the elevator up, he is thinking about how he is attempting to elevate his career.

His mind surfing through how he is going to answer certain questions, reminding himself that his education and qualifications clearly meet the job requirements.

His references are in order and his resume speaks for itself.

Except that one thought that magically appears in his mind right before he steps out of the elevator.

What will they think when they see that I am Black?

His mother and father gave him a resume-ready name so they wouldn’t know from the application.

Surely they would have searched his LinkedIn page before setting up the interview.

Why are these thoughts in his head?

The thoughts are there because racial discrimination in the workplace in most people’s minds truly exists.

Is it just in their minds though?

Countless studies have been conducted and articles written on the statistical discrimination theory, which holds that women and minorities earn lower wages because they on average have lower productivity.

That sounds like a very nice way of saying the perception is that minorities are lazy so they get paid less.

But this is not what this article is about.

It is about the African-American man that is well educated, qualified and suitable for the position, but struggles climbing the “Black Ladder” of corporate America.

Racial discrimination in the workplace is real.

“The New CEOs: Women, African American, Latino, and Asian American Leaders of…” by Richard L. Zweigenhaft and G. William Domhoff states that in 1955 when Fortune Magazine published its first list of top 500 companies in the United States, every CEO of every company was a White male.

Jamie, an African-American IT system engineer, recalls struggling through racial discrimination in the workplace for years.

“I was on a three year project at a company where we were changing out the entire software system.  I worked 75 to 80 hours a week, holidays and on call constantly.  My Caucasian counterparts did not do the same, but yet I was always looked at like I didn’t know enough and they knew more.”

Other Black men feel as if they are a pawn or they are there to fill a quota.

As they move up the “Black Ladder,” the company uses them in two ways.  The company can claim they are an equal opportunity employer and use their Black faces as a way to reach markets that they normally wouldn’t touch.

It is a very clever way of masking racial discrimination in the workplace, reverse promotion.

Between 1999-2010, 14 African-Americans were appointed the position of CEO of Fortune 500 companies according to Zweigenhaft and Domhoff.

Notice that the statement says 14 African-Americans, not gender specific but we are still making progress, right?

Well, what happens when you arrive?

You have worked your way through the racial discrimination in the workplace, specifically corporate America.

The question that is now asked by many is did you lose some of your “blackness?”

Did you have to laugh at some jokes that were not funny at all or endure some stories that you could not relate to?

Were you asked “the questions?”

Did you change your style of dress?

No more Steve Harvey suits, but you now only shop at Jos. A. Bank.

An educated brother that I will leave nameless said, “How can you criticize a brother who assumingly had to build a thick level of self-resilience and indifference to opposition in means of being successful?”

So we must continue playing the game and climbing the “Black Ladder” step-by-step knowing the real hate may begin once at the top.

It is 9:07 a.m. and the bell inside the elevator rings and the number 15 on the panel board lights up.

He adjusts his jacket one more time.

The doors open and he pauses for a second hoping that just like the elevator doors are opening, the doors to his future are opening as well.

He has a calm nervousness about him but you can’t see it through his business swagger.

He approaches the receptionist desk making eye contact with her.

He is proud to say his resume-ready name.

She smiles and says, “Mr. Coleman is expecting you.  Have a seat please.  Would you like a water or coffee?”

His only thirst is for success.

He takes out his portfolio to glance over some of his accomplishments when he hears shoes stepping across the tiled floor.

He slowly looks up.

A hand reaches out to shake his.

He begins to stand when he notices that the hand looks like his.