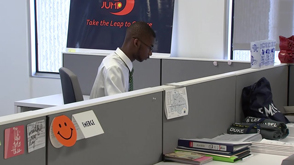 Colby College student and native Houstonian Nile Dixon is using his love for technology to give back to his community (Photo courtesy of Misty Blue Media).

The coverage of African-American men in mainstream media often becomes a bit cliché.

The stories mostly sound the same: lack of education, criminal activity, unstable homes and a lack of skills to really compete in this new technological age.

Dixon, a native Houstonian, self-trained computer programmer and student at the prestigious Colby College in Waterville, Maine is making a mark in the field of technological advancement and in the process is giving back to his community and breaking stereotypes of African-Americans in STEM (science, technology, engineering and math) fields.

“I was born in a single parent household,” Dixon told RegalMag.com.  “I developed a love for technology by going to organizations like Sketch City and seeing how I can develop technology to address issues.  Seeing the immediate impact tech can have on a community made me love making technology.”

And the technology that Dixon has made thus far has possibly done a lot to save lives in his hometown of Houston.

“The text bot works this way: a person would send their zip code or address to a specific phone number, then the phone number would send the text to a website and the website would process (that) information and send back to the user the nearest hurricane shelter,” Dixon explained.

So far, 3,000 people have used Dixon’s text bot for assistance.

As a high school student while participating in the Sketch City civic hacking group, which encourages Houstonians to create technology to address problems in the city, Dixon created the computer code to address the human and sex trafficking problem in the city.

As a result, Dixon’s team was selected to meet with the mayor of Houston to push the initiative forward.

“Working on the human trafficking project was also interesting,” Dixon said.  “Initially working on the project, I never knew the widespread nature of prostitution and sex trafficking in America.  But after engaging in this project, I found out that there is a much larger industry than meets the eye.”

“According to the Georgetown study…Black students tend to cluster in fields like social work that lead to lower-paying careers.

Dixon believes to increase the number of African-Americans in STEM-related fields, initiatives need to be created that exposes them to STEM and encourages them that this is something that they can do.

“The lack of interest in STEM majors in the Black community in my opinion is because the lack of accessibility to tech,” Dixon said.  “In order to develop an interest in tech, you need financial resources to purchase.  In order to engage in electrical engineering, you are going to need to know what resistors and capacitors are and where to buy them.  In order to want to know if you will be good in biomedical engineering, you would need to have the financial resources to.”

Fortunately for Dixon, his ingenuity led to financial resources to the tune of $2 million in scholarship offers.

And in the process, Dixon and many others are changing the narrative of young African-American men.

And yes, African-American men can use that brilliance to change their community and change the world.