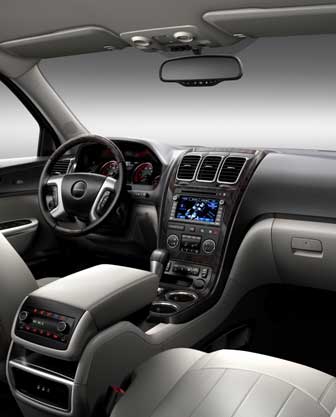 Michael Burton is one of the few African American car designers, designing the interior (pictured) and exterior of the Acadia Denali. 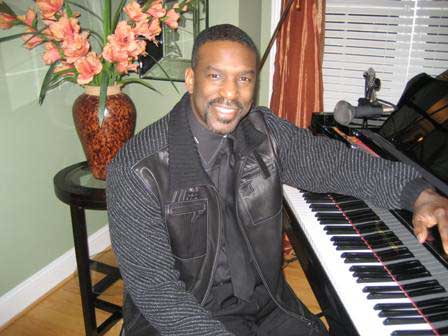 Not just a car designer, Burton is a renaissance man who loves playing the keyboard in his spare time.

If you are looking to upgrade to a crossover vehicle with the swagger of a deuce-and-a-quarter (Buick Electra 225), great fuel economy, a luxury interior, embellished features,  space and utility,  and with an affordable price tag—then  GMC’s Acadia Denali is the right choice for you.

“This is definitely a vehicle that people will want to geek; it has an aggressive and athletic look,” says designer Michael Burton.

He says that drivers who are “design savvy, with multi-functional lifestyles, activities during the day that need to meet storage, and don’t want to drive a big truck or minivan” would be interested in the Acadia Denali, because “it gives you the functionality of a big truck or minivan,  but the look and feel of a small vehicles.”

Michael Burton, a leading African American Designer and  Director of Crossover Interior Design for GMC, led the exterior design of the Acadia Denali and later was put on the interior team to direct the design of the smooth internal features.

Designing cars comes easy to Michael Burton, not only because he grew up in the backyard of America’s automobile industry (Detroit, Mich.), but also because he has an “innate ability to draw and design, coupled with passion—it’s a natural fit,” says Burton.

“When I talk to young people I am asking them what they are passionate about. Our God-given abilities and talents are given to us so that we can service our community and humanity, what we do becomes and extension of what we are impassioned to do. When I go to work every day, I am doing what I like to do. I like to see things created, and that have not been created before.”

Michael Burton, a product of a single-parent household led by his mother, had a mentor at the Urban League (Mr. Reynolds) who saw his talent and encouraged his natural gifts.  When he was about 12 or 13-years-old, his mentor encouraged him to write General Motors.

“Milo in HR wrote me back at 12 or 13 because they liked my sketches. In the letter that GM sent back to me, Milo gave me some insight about college prep, and industrial design.  I was pretty excited. I used them (sketches) when I went to conferences. As I went through high school, I just continued to work on my portfolio,” says Burton.

His innate ability and guidance from his Urban League mentor helped him gain a 4-year scholarship from Ford to attend the internationally known College for Creative Studies. Talent, geography, mentoring, a scholarship, and the right school were the affirmative action that Michael Burton needed to gain access to the industry.

“What helped is that I had a scholarship from Ford Motor Company. Ford also offered me a job. Right out of college I had a job. I have worked for all three domestic automobile companies in my years. I have been the first African American designer to do so. I was the first at Chrysler, but not the first at General Motors,” says Burton.

When asked about the most exciting part about designing the Acadia, Burton says “well, that is a hard one. The beginning embryonic part is exciting because it was a new vehicle, a new level of interior quality. But ultimately your baby being conceived is the most exciting. Your months and months of working on the vehicle from pen to clay model, to rolling out on the street; from your imagination to driving down the street. Everybody else gets to share in that experience.”

As we approach Black History Month, Michael Burton is another reminder of the ingenuity of those of African ancestry.  Like Garret Morgan, George Washington Carver, Elijah McCoy, and Madam C. J. Walker who all added value to their particular industries and to American life—Burton’s design is adding to the driving experience of Americans.

Michael Burton believes that we should all find out what we are passionate about and then follow it. Burton says, “I think everybody needs to follow their passions, because within the framework of their passions you find your life’s destiny; having done that you need to cultivate those passions. You can be a musician or vocalist, but you must maximize and cultivate those gifts. It helps that you can draw, but you must cultivate and be able to communicate your ideas. Cultivate your art and skills.”

Hip-hop artists Jay-Z, Lil’ Wayne, T.I. and Kanye West boasted that, “No one on the corner has swagger like us” because they, like Burton, took something that they were great at and made it into a career.  So, what are you gifted at that can add some swag to the world?

Faniel is a contributing writer for Regal Black Men’s Magazine.