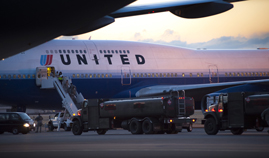 The coronavirus pandemic has led to a shakeup at United Airlines.

As the airlines industry fights to stay above ground during the coronavirus pandemic, brutal honesty might be just what the doctor ordered.

“It’s far better to be too aggressive than not aggressive enough,” Scott Kirby said in March.

Since the coronavirus pandemic struck, airlines have had to aggressively slash flights, prices and jobs to make up for a record low number of travelers.

AirlineGeeks.com reported, “While the airline sees its demand slowly creep up, it is anticipated that Kirby, who is known to be a brutally honest and hands-on person, will take a number of drastic changes to protect both the passengers and the airline. He will continue to oversee operations, revenue and other businesses that he managed as president, easing his transition and helping the carrier to maintain consistency at a crucial time.”

Many passengers around the globe have expressed apprehension about getting on an airplane because of fear of catching or spreading the coronavirus.

Mainstream news outlets have reported stories of airplanes jam packed with passengers although many airlines said that they would space out travelers by doing things like keeping the middle seats open.

However, as airlines have lost considerable amounts of money in recent weeks and months, some airlines have canceled many flights and packed passengers on the same flights to save money.

Nevertheless, airlines might see this as a means of surviving because having an exorbitant amount of virtually empty flights would cost the airlines unnecessary money.

Not to mention, flying the same amount of flights as in the past would require airlines to pay flight attendants and pilots even if their services are not necessary.

However, United Airlines has received federal aid via the CARES Act, which prohibits them from voluntarily laying off employees or cutting pay until Sept. 30.

In an effort to cut cost, Scott Kirby and outgoing CEO Oscar Munoz will forego their base salaries.

“United has raised $4 billion over the past few months. As of April 29, it has $9.6 billion in liquidity, and has access to 10 percent of its cash directly at hand.”

Not only has United Airlines made a change at the CEO position.

United Airlines has also made a change at the presidential level.

Like Kirby and Munoz, Brett J. Hart’s job will be to steer the company during one of the must tumultuous times in the history of the airlines business thanks to COVID-19.

In a statement, Oscar Munoz said, “Brett is a well-established and widely respected leader who has established a strong track record over the last decade, helping United navigate complex challenges across all areas of our business.

“He is recognized inside and outside of the airline industry for his leadership and has played a central role in shaping our strategy, culture and leading our community engagement around the world.”

Scott Kirby added, “Working closely with Brett over the last three years, I have seen first-hand his thoughtful and intellectually rigorous approach to navigating the complex environment in which we operate and effectively implementing our business strategy.

“The leadership Brett has shown as we have managed the current crisis reinforces the conclusion I reached last year. Brett is exactly the leader that United needs right now to take on the role of president.”

Just like Oscar Munoz and Scott Kirby, Brett J. Hart will also forego his salary to help the company financially during the current crisis.

Hart said, “I am honored and energized as I take on these new responsibilities to lead this incredible team that I am convinced will build United into a thriving industry leader.

“The path forward will not be easy, but I am confident that Scott and I will continue our partnership to lead United through the extraordinary challenge posed by COVID-19. United’s bright future is only possible because of the commitment of the most talented airline professionals in the world who serve United and our customers every single day—and I could not be prouder of them.”

Black Enterprise reported, “For the last decade, Hart has served throughout the company in various leadership roles. In 2015, he served as interim CEO for six months while Oscar Munoz who is the [former] CEO recovered from a heart transplant.

“He will also continue to oversee business-critical functions like the Corporate Real Estate team and manage United’s industry-leading environmental sustainability efforts. His responsibilities will expand to include managing the Human Resources and Labor Relations teams.”