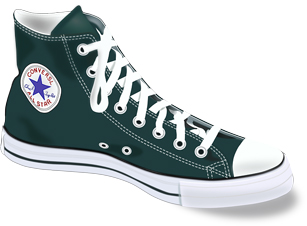 Nike has named G. Scott Uzzell as CEO of Converse, a brand that has existed since 1908.

FAMU Graduate Named Head of Converse By Nike as Sales Continue to Soar for Nike, Converse

Nike keeps on winning in the hearts of African-Americans.

First, the shoe brand embraced exiled NFL quarterback Colin Kaepernick with an endorsement deal after he failed to latch on with a team in the aftermath of his protests against police brutality and systemic racism during the national anthem.

Uzzell graduated from Florida A&M University (FAMU), a historically Black college in Tallahassee, Fla., sits on the FAMU Foundation Board and serves as a member of the Executive Leadership Council.

Uzzell has a background in sales and marketing.

The FAMU alum previously worked for companies like Proctor and Gamble, Coca-Cola and Nabisco.

While at Coca-Cola, he led the portfolio of high-growth brands for the company, which included Honest Tea, ZICO Coconut Water, Fairlife Milk and Suja Juice.

Furthermore, Uzzell had stints in leadership at McDonald’s U.S. Division.

He also serves on the boards of State Bank and Trust Co., Suja Juice Company and Fairlife LLC.

Uzzell’s position as CEO of Converse begins on Jan. 22.

He will report directly to Spillane and replaces Davide Grasso who will retire from the company at the end of the year.

Footwearnews.com said, “Uzzell is coming on board as Converse is starting to rebound from two years of struggles. Fashion began to shift away from its iconic looks and toward retro styles from the 80s and 90s, resulting in declining sales starting in 2016. But the company’s fortunes showed signs of change when Nike, Inc. delivered its Q1 2018 earnings report in September, which revealed a 7-percent year-over-year revenue increase to $527 million.”

Converse, established in 1908, is wholly owned by Nike, Inc. and is based in Boston.

Nike based in Beaverton, Ore is the world’s leading designer, marketer and distributor of original athletic shoes and apparel.

Last year, Nike received criticism from some conservative sports fans for revealing that Kaepernick still held his endorsement deal with the company.

More criticism came to Nike when the company revealed that Kaepernick would be the face of a new advertising campaign, which celebrated his activism.

While some disgruntled former Nike supporters burned their Nike gear in protest, Nike sales and stocks eventually increased after the Kaepernick ad.

Nike even trolled protestors by releasing a meme on social media advising people that burned their Nike gear to just do it safely, a play on their slogan, “Just Do It.”

“It looks like a real rebuke for folks who said, ‘We’ll boycott Nike’” said Jerry Davis, a University of Michigan business school professor. “It turns out Democrats buy a lot more sneakers than Republicans. The demo that is willing to spend $200 on Nike sneakers is not the demo that’s going to boycott them because of Kaepernick.”

On Dec. 21, Nike stock sailed even higher after the company reported that it had blown past its sales expectations for the second quarter, which some say validated the Kaepernick “Just Do It” anniversary ad campaign.

After the release of the ad, sales rose and Nike reported a 10 percent jump in income, bringing in $847 million.

“I believe the consumer wants brands to take on social issues,” said Matt Powell, senior sports industry advisor for market research firm The NPD Group. “The core consumer for Nike is teen male, it’s likely they were going to respond positively. As opposed to a decade ago, a brand has to be transparent…A decade ago, conventional wisdom was brands kept that kind of view quiet, and now brands are forced to take a position.”

Powell also tweeted that for every person that said they would boycott Nike, 100 said that they would support Nike after the controversial Kaepernick advertising campaign.

Large brands like Nike rely heavily on social media as opposed to the past when companies relied heavily on focus groups to gauge customers’ opinions.

The company also launched a direct-to-consumer strategy, a different approach from the company’s past marketing to retailers.

“Amid an increasingly dynamic macro-environment, what is certain is that Nike’s execution of the consumer direct offense is driving consistently strong growth across or diverse, global portfolio,” said Andy Campion, the executive vice president and chief financial officer of Nike, Inc. “As we continue to invest in digital transformation, we are driving consumer-centric disruption in our industry and unlocking new opportunities for growth.”