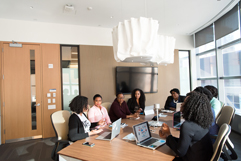 Not Yet in the Black: Unemployment Rises in African-American Community

“Somebody please inform Jay-Z that because of my policies, Black Unemployment has just been reported to be at the LOWEST RATE EVER RECORDED,” President Donald Trump tweeted in November 2018 after the rap icon criticized his policies.

Despite President Trump’s claims to the contrary, the economy still looks bleak for African-Americans.

However, the unemployment rate for African-Americans stalled at 6.7 percent.

Compared to other races, the African-American unemployment rate was 116 percent higher than for White Americans.

Only African-American teenagers had a higher unemployment rate at 13 percent.

In May 2018, Trump somewhat correctly stated that African-American unemployment rates had fallen to their lowest levels since the Bureau of Labor Statistics (BLS) began keeping track of those numbers in 1972.

By February 2019, however, the African-American unemployment rate had risen to 7 percent, erasing the gains made the previous year.

However, the Labor Department used a different data set before 1972.

With the different data set, the Labor Department reported the unemployment rate for “Negro and other races” was as low as 5.3 percent in 1953, which is significantly lower than the current African-American unemployment rate.

The data set used to formulate the 1953 unemployment rate dates back to 1947.

“This isn’t the same measure but is the best that exists and even then ‘Negro and other races’ is higher than Whites,” said Omari H. Swinton, chairperson of the economics department at Howard University in Washington, D.C.

The Grio reported, “It is believed the differences in the unemployment rate are a result of Black unemployment in large urban populations being higher than the rate across the nation which inflates the average.

“The fact is cited by Detroit’s data showing 80% of the population is Black, while the city has an unemployment rate that is well above the national average.

“Additional factors include the number of Black Americans in prison. In 2016, per 100,000 Black Americans, 1,609 were incarcerated, in comparison to 274 White Americans. After the time is served, it becomes complicated to secure employment due to criminal background checks causing resistance from employers.

“Segregation is also a source of the problem, due to a disproportionate number of Blacks not having access to the best schools and housing.”

Camile M. Busette, a senior fellow at the Brookings Institute told 24/7 Wall Street, “People are not walking around, working together, going to school together, taking the same metro together, etc. So there isn’t a lot of familiarity.”

Unfortunately, 24/7 Wall Street said there are no indications that the African-American unemployment rate will reach the national unemployment average anytime soon.

“We should never celebrate the fact that Black folks are working,” said Andre Perry of the Brookings Institute. “It’s like saying: ‘Look, you have a job. Why should you complain.’ And I think that’s what Trump is signaling. He’s saying to the Black community, ‘Look what I’ve given you,’ and not necessarily saying, ‘Let’s look at the percentage of people in poverty, let’s look at the percentage of people rising to the middle class.’ Are Black folks getting the kind of jobs that are propelling them to the middle class? No, they’re not. You still see the gap in the unemployment rate, and you will see that gap in median income.”

Furthermore, many economists and political scientists say that the decline in African-American unemployment began under former President Barack Obama when the Great Recession concluded.

In March 2010, African-American unemployment peaked at 16.8 percent and has steadily declined under the administrations of former President Obama and Trump.

The CEA says several factors contribute to much higher unemployment rates for African-American men versus their White male counterparts.

Those factors include: “differences in education or skills,” “labor market discrimination,” the “first fired, last hired” factor and “the lasting effects of higher incarceration rates among Black males.”

The CEA also reported, “Although there is further progress to be made in closing the racial and ethnic employment gaps, it is apparent that the economic growth during the current business cycle is having the largest positive effect on the employment of Blacks and Hispanics.

“The average difference of 4.6 percentage points between the prime-age employment rates for Blacks and Whites in 2018 and of 3.5 percent between Hispanics and Whites are each the smallest annual gaps ever recorded since the BLS began publishing prime-age-employment-to-population ratios by race since 1994.”

“Given relatively small sample sizes and data volatility, I try to not make a huge deal about any month-to-month trend,” EPI senior economist Elise Gould said on March 8. “So, when the Black unemployment rate started rising in December 2018, there was a good chance it was a blip. That so-called blip has happened for three months in a row.

“We cannot definitively say this is a trend that is going to continue, but it is certainly an indicator to watch in the coming months. That’s especially true given widening wage gaps between Black and White workers in recent years.”