Louisville, Ky. to Rename Airport in Honor of Muhammad Ali 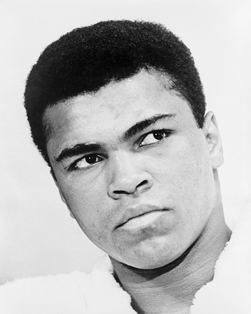 Boxing legend Muhammad Ali will forever be honored in his hometown after Louisville, Ky. announced they would rename its airport after “The Greatest.”

The three-time heavyweight boxing champion of the world grew up and got his start in boxing in Louisville, Ky. as Cassius Clay.

“Muhammad Ali belonged to the world, but he had only one hometown, and fortunately, that is our great city of Louisville,” said Mayor Greg Fischer.

“It is important that we, as a city, further champion the champ’s legacy,” Mayor Fischer added. “And the airport renaming is a wonderful next step.”

Ali once said Louisville is where his “greatness came and started.

The champ joins a small list of star athletes with airports named after them such as Arnold Palmer Regional Airport near Pittsburgh, Pa. in his hometown of Latrobe, Penn. and Cristiano Ronaldo Airport in Madeira, Portugal.

Some believe that naming the Louisville airport after Ali will increase business for the airport.

Ali’s widow Lonnie Ali said her husband was a “global citizen” who did not forget his roots and upbringing in Kentucky.

The announcement of the renaming coincides with Ali’s birthday.

The airport board studied renaming the airport for over one year before voting on the change.

Board member Nikki Jackson who serves as the senior vice president and regional executive of the Louisville Branch of the Federal Reserve Bank of St. Louis, hopes that the renaming can “amplify the brand” of the Louisville area.

As a Black woman, Jackson said she is “always looking for opportunities for people who look like me to be validated and exalted and celebrated. It doesn’t happen a whole lot.”

Before the rechristening can become official, city officials have to finalize an agreement with Muhammad Ali Enterprises to use the late boxer and former Nation of Islam minister’s name and likeness.

Once the two sides reach an agreement, officials anticipate spending $100,000 so that the airport can reflect Ali’s image.

Despite worldwide respect, Ali remains controversial for some, especially in America.

Many of his critics still dislike his stance on the Vietnam War, his membership in the Nation of Islam and his friendship with controversial leader, Malcolm X.

Ali famously refused induction into the armed services during the Vietnam War because of his religious convictions.

As a result, Ali would see his heavyweight championship and boxing licenses stripped across the country.

He also faced possible prison time for refusing induction until the United States Supreme Court eventually ruled in his favor, agreeing with him that his status as Nation of Islam leader made him a conscientious objector of the war.

Ali began his rise to the top of the boxing world as a youngster in Louisville.

Legend has it that someone stole his brand new $60 Schwinn bicycle, and he boldly claimed that he wanted to fight the person that stole his prized possession.

When Police Chief Joe Martin, Sr. overheard the boisterous 12-year-old challenging the culprits to a fight, he took him under his wings and taught him the ins and outs of the sport of boxing.

“In the past 20 years, I guess, I’ve taught 10,000 boys to box, or at least tried to teach them,” said Martin during Ali’s boxing heyday. “Cassius Clay, when he first began coming around here, looked no better or worse than the majority. About a year later, though, you could see that little smart aleck—I mean, he’s always been sassy—had a lot of potential. He stood out because, I guess, he had more determination than most boys, and he had the speed to get him someplace.”

Blessed with quick feet, a sharp jab and even sharper mouth, it did not take the young Clay long to climb the amateur ranks in boxing.

In 1960, Clay won the gold medal in boxing at the Summer Olympics in Rome, where he had a rumored romantic fling with the Olympic tack star, Wilma Rudolph.

Although he returned to Louisville as a hero, he still returned to his hometown as a second-class citizen because of the color of his skin.

He reportedly threw his gold medal in the river after returning home to face the same discrimination as any other African-American man.

Despite his treatment upon his return to Louisville, Clay did not lose his love for his hometown.

The future icon set up a group called The Louisville group, consisting of local businessmen, to oversee his business and boxing affairs when he turned professional.

“In Cassius, we saw a good local boy with a clean background from start to finish,” Faversham said at the beginning of Ali’s professional career. “With the proper help and encouragement, he could bring credit to himself and his hometown.

“There are plenty of wolves who would leap at the chance to get their paws on Cassius, to exploit him and then to drop him. We think we can bring him along slowly, get him good fights and make him the champion he wants to be.”

Now the three-time heavyweight boxing champion’s legacy has come full circle to the city in which it began.

Back in 1960 he might have flown to Rome from the airport in his hometown and now almost 60 years later it will bear his name.