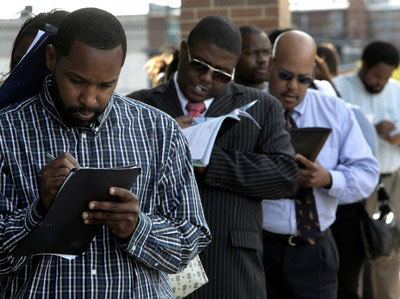 Black men usually find themselves on the outside looking in when applying for upper management positions (Photo Credit: AskaWomanWhoKnows.Wordpress.com).

While most corporations boast of the importance of diversity–and some are able to achieve it at the entry level–there are very few Black men found at the upper levels of management, according to a recent report.

According to a September report from the Alliance for Board Diversity that takes a census of Fortune 500 board directors, the number of board seats held by Black men declined from 5.7 percent in 2010 to 5.5 percent in 2012.

Black men were the only group to see a decrease. Representation remained stagnant at 1.9 percent for Black women.

Those numbers are in line with what some Black men said they see in their corporate jobs.

“I think things have gotten better in terms of hiring minorities in [higher] numbers,” said Kevin Prince, who works for ADP payroll company in Alpharetta, Ga. “But you have to look at where they’re staying. It’s mostly entry-level jobs or entry-level management positions. There are [very few] African American men in senior management.”

Prince said as a Black man, he constantly feels the need to not only be as good as his White colleagues, but better.

“You have to realize that, whether it’s fair or unfair, you have to be on your Ps and Qs,” he said. “You have to be twice as good. … You can’t get away with things that your peers of other races can.”

That’s something that Curtis Knight, who works for Tampa, Fla-based marketing company Triad Retail Media, said he keeps in mind when approaching a new job.

“You have to make sure you have everything in order,” he said. “My dad always told me you can’t give people any excuses [to dismiss you]. You want people to have the least amount of excuses as possible.”

Knight said it is tough being one of about five Black men in a 500-person company, especially when he knows that many non-Black people may view him as a representative of all Black men–or all Black people, even.

“No matter what you do, you always are a representative, whether you want to be or not,” he said. “If you present yourself in a negative way that plays into a stereotype, then it’s, ‘oh, I knew Black people were like that.’ If you act differently than is expected, they’ll say ‘Curtis, you’re different. You’re really White inside.’ … You’re damned if you do and damned if you don’t.”

Knight said he can tell when non-Black coworkers are taking the things he says as the word of all Black people.

“You’ll always get questions,” he said. “That’s why I didn’t go to work in the days after the Trayvon Martin trial.”

He said there have been times when a coworker crossed the racial line into inappropriateness, but he typically chooses to laugh it off and take it in stride.

“You don’t want to have a ‘when keeping it real goes wrong’ moment,” Knight said. “Even if you’re right, it’s never a good look.”

Prince said he’s never been faced with a major situation where he’s had to tell a coworker they’ve crossed the line.

“But it’s the smaller, subtler things,” he said. “Like hearing someone tell a Black joke. You know they meant it in fun, so you have to suck it up and take it.”

Knight said he’s afraid the political climate since the election of President Barack Obama has had some negative unintended consequences for Black people in general and Black men specifically.

Prince said young Black men starting out in the corporate world should be prepared to work hard if they want to advance.

“Do what everybody else won’t do,” he said. “Work the overtime that other people won’t. Take the projects no one wants.”

He said that good work ethic has worked for him and goes far in most corporate offices. And hopefully that will help increase the number of Black men in senior positions.