American Unemployment and its Affect on Minorities 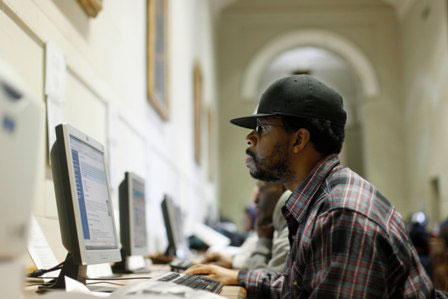 James Dash, Jr., who is unemployed, uses a computer to search for work in Philadelphia (Matt Rourke/AP)

American Unemployment and the Impact on African Americans

A recent holiday cartoon by acclaimed cartoonist Walt Handelsman featured a number of empty gift boxes that were labeled “jobs” and the character in the cartoon was looking inside one of them quite disappointed.

While American unemployment has reached record numbers, it is dwarfed by the even higher rate of unemployment impacting African Americans who do not even have the opportunity or access to open the pretty, yet empty boxes.

According to Department of Labor figures, while the American unemployment rates were in double digits (approximately 10.2 percent in October 2009), the figure for African Americans was closer to 16 percent (approximately  15.7 percent).  This has caused much concern as the issues regarding just how and when these jobs will be created and who will benefit.

According to reports in the Associated Press, the Federal Reserve does not fully expect the economic recovery will be strong enough to drive down the jobless rate quickly.  Currently, many mainstream media outlets have begun efforts to attack President Obama’s plans to increase job opportunities overall, by infusing the discontent within the African American community.  Organizational leaders including Rev. Al Sharpton of the National Action Network and Marc Morial of the National Urban League have been working aggressively to keep the main issues regarding American unemployment and the impact on African Americans in the forefront.

Morial recently sent a detailed letter and program outline to President Obama who stepped up his job creation agenda in light of the increase in American unemployment.  Morial was quoted from his letter in the Baltimore Afro-American as saying that, “More than one out of every three unemployed worker has been out of a job for six months or more. The situation facing African Americans and Latino workers is even bleaker.”

While Rev. Sharpton has made it clear on various media outlets including “Larry King Live” and his own radio show that he may not agree with all of President Obama’s policies, he is willing to work with the President who inherited a bad situation and has been trying “to clean up a lot of mess in a number of areas that he inherited from previous administrations.”

One area that remains underserved within the African American community and could be instrumental in addressing American unemployment is entrepreneurship.  With small businesses representing over 80 percent of the American economy and a major job creator, serious support given towards developing small businesses would help to bring down the unemployment rate.

The state of Maryland recently launched the Minority Business University initiative to provide a forum for minority and women-owned businesses to identify areas to build and grow their operations, especially in the area of financing.  Lack of access to capital has long been the death knell for minority businesses. Now, with federal directives in place for the major lending institutions, who were backed by taxpayer dollars, to become better community partners there is hope for small, minority-owned businesses to have an opportunity to get the assistance they need to see their dreams become a reality.

There is no one solution to American unemployment, but the recovery process has to start somewhere. Maybe this time next year, the holiday cartoon by Handelsman will feature gift boxes that will highlight new businesses, more jobs and happy, diverse faces.  It is the holiday season after all…we can still believe in a thing called hope (Helping Others Provide Employment).