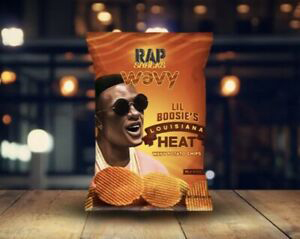 With the help of fellow rappers like Boosie, Master P has found success with Rap Snacks (Photo Credit: Taquari Hatch).

Should people really find it shocking that Master P has found success in the food industry?

Hip-hop impresario Percy Miller, better known as Master P, once turned down a seven-figure offer to sell his upstart No Limit Records.

He figured that if someone wanted to purchase his fledgling record company for seven figures, it must have had a value of eight or nine figures.

That innate sense of business helped make No Limit Records one of the most successful independent rap record labels in the 1990s.

Master P’s ability to create opportunities for himself and others even led to a brief stint in the National Basketball Association.

And that independent streak has led to Master P striking gold again with his investment in Rap Snacks and his new ramen noodles (Icon Ramen Noodles) under the Rap Snacks brand.

Rap Snacks and Icon Ramen Noodles will be available at Wal-Mart and other stores throughout the country.

Master P stated that his dream “for Rap Snacks is to make it one of the biggest brands in the world.”

The brand started small and is now expanding with the Wal-Mart deal.

“I grew up on noodles, now I created my own brand,” Master P said. “Start small and build. Get you some product if you want to be successful.”

Master P has always had products to sell.

But one of his biggest talents might be his ability to brand his products.

In fact, Master P branded No Limit Records before many in the urban community cared about their “brand.”

He understood that quantity held the same significance as quality.

As a result, he accumulated some of the most talented rappers from the New Orleans area like Mia X, Mystikal, Fiend, Mac and Souljah Slim and took over the rap industry in the late 1990s with album releases coming out at a rapid pace.

He branded his artists No Limit Soldiers and fans eagerly awaited a soldier anthem on many of No Limit’s album releases.

Furthermore, the soldier movement extended to the company logo, which consisted of the infamous No Limit tank.

The New Orleans native plastered that logo largely on the back of every No Limit CD.

Hip-hop fans would purchase many of those albums simply because it had that No Limit tank on the back of the CD cover.

Furthermore, at a time in which music labels spent a lot of money promoting upcoming albums before the popularity of social media, Master P used cross promotion to advertise future No Limit Records releases.

Cross promotion simply means that Master P inserted advertisements for future albums inside the sleeves of a current release.

For example, if a fan purchased Snoop Dogg’s 1998 No Limit Records debut album, “Da Game is to be Sold, Not to be Told,” the purchaser would also see advertisements inside the CD for Big Ed’s album “The Assassin” or the “Goodfellas” album by Da 504 Boyz.

His signing of Snoop Dogg away from Marion “Suge” Knight and Death Row Records showed that Master P also knew that star power would help sell his product, not just brand recognition.

Therefore, it should come as no surprise that Master P’s food endeavors have used star power to sell products like chips and ramen noodles.

Hip-hop legends like E-40 and Boosie have lent their names to particular flavors of noodles and chips, respectively.

A Boosie fan in Baton Rouge, La. might try his flavor of chips when they see his image on the bag.

Furthermore, an E-40 fan in Vallejo, Calif. might try his flavor of ramen noodles if they see his name and likeness on the container.

The ramen noodles can be cooked in a microwave or on a stove.

Always a fan of ownership, Master P released “I Got the Hook Up 2” directly to video on demand platforms and select movie theaters, bypassing the middlemen like movie distributors.

Although “I Got the Hook Up 2” did not break any box office records, the film might have been a precursor to the current climate in which movie studios have to bypass movie theaters for video on demand because of the coronavirus pandemic.

Many movie theaters remain closed because of the COVID-19 pandemic.

The movie “Trolls World Tour” has made approximately $100 million by going directly to video on demand, meaning they do not have to share profits with movie theater chains.

Because of his numerous business endeavors, Master P, 50, is now worth approximately $800 million according to The Source.

He began accumulating wealth after he received a $10,000 malpractice settlement after the passing of his grandfather while attending Merritt Junior College in Oakland, Calif.

Despite the wealth that Master P has accumulated for his family, he and the rest of the Miller family have not ignored philanthropy.

His son, actor Romeo Miller, said that the Icon Ramen Noodles brand would give money “back to the community.”