Experts: Economy Will Not Recover Immediately After Opening Back Up 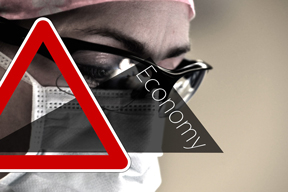 The coronavirus has had an extremely adverse impact on the United States economy.

President Donald Trump wants the economy to reopen on May 1.

Dr. Anthony Fauci said the economy could reopen in phases next month.

Governors have their own opinion about when to reopen their states even though President Trump said he would decide when the various states reopen.

Trump has since admitted that the governors will make the final decisions for their states.

However, economists say that when the country reopens it will take awhile for the economy to rebound.

Evidence shows that stay-at-home orders have not been the only reason that the economy has stalled recently.

Research shows that behavioral responses from customers and workers scared to contract the virus have contributed to the economy slowing down.

In other words, even when the government eases restrictions, people could remain fearful of contracting COVID-19, therefore choosing to still socially distance.

That choice has still caused many businesses to suffer and employees to get laid off in states with no social distancing rules or fewer restrictions than states with a large number of positive COVID-19 tests.

“States that haven’t yet closed businesses or put their populations on some sort of lockdown aren’t escaping enormous spikes in unemployment,” explained Ernie Tedeschi, a former chief economist for the Treasury Department who currently serves as a managing director at Evercore ISI. “The pain is not just deep, it’s wide. This punctuates that the fundamental problem with the economy right now is the pandemic.”

Some government officials have warned that reopening the economy would happen over time and not equally nationwide.

Certain areas of the country and certain businesses would reopen before others.

According to Dr. Robert Redfield, director of the Center for Disease Control and Prevention, the country would reopen, “community by community, county by county.”

Additionally, Redford said the country would have to “substantially augment our public health capacity to do early case identification, isolation and contact tracing.”

Redford told NBC, “There’s no doubt that we have to reopen correctly. It’s going to be a step-by-step, gradual process. It’s got to be data-driven.”

A member of the Federal Reserve cautioned that it could take 18 months for the country to fully reopen.

“This could be a long, hard road that we have ahead of us until we get to either an effective therapy or a vaccine,” said Neel Kashkari who serves as head of the Federal Reserve Bank of Minneapolis.

Nevertheless, Trump still boasted that he had the authority to force states to reopen and not the governors, despite what the United States Constitution says.

When asked what part of the Constitution gives him such power, Trump responded by stating that several provisions give him that power without naming one.

New York Governor Andrew Cuomo, however, disagrees with Trump saying that regardless of what the president says, he will make the decision of when to reopen New York State.

Other governors, Republicans and Democrats, agree with Cuomo’s assertion.

On the East Coast, the governors of Connecticut, Massachusetts, New Jersey, New York and Rhode Island decided to create a committee of public health officials, economic development officials as well as their chiefs-of-staff.

Their counterparts on the West Coast like the governors of Oregon, California and Washington announced a collaborative effort to reopening the economy, which they have dubbed the Western States Pact.

In a joint statement, the West Coast governors said, “Our states will only be effective by working together.”

California Governor Gavin Newsome said that he had reached out to other governors on the West Coast to discuss the “California-based thinking” about reopening, which the governor said would be based on “facts,” “evidence” and “science.”

While the stay-at-home orders came from the various governors across the country, the president did release nonbinding guidelines urging the country to pause from their normal routines until the end of April.

Those stay-at-home orders and guidelines have received credit for flattening the coronavirus curve in numerous locations.


Despite the confusion that would come if the president and the governors make contradicting statements of when to reopen the economy, the governors insist that geography will be the determining factor when it comes to reopening the economy.

“The reality is this virus doesn’t care about state borders, and our response shouldn’t…either,” said Rhode Island Governor Gina Raimondo.

Texas Governor Greg Abbott said that he works with the White House when it comes to planning a reopening of Texas businesses.

Governor Abbott wants a staggered approach to reopening the economy in which companies that have a minimal impact on spreading COVID-19 will open before those that could have more potential to spread coronavirus.

“This is not going to be a rush-the-gates” situation, said Abbott.

On Monday, Trump used his daily coronavirus press briefings to defend his response to the COVID-19 pandemic and showed a campaign-like video to speak out against the criticism that he has received.

For almost an hour at his Monday press briefing, Trump expressed his frustration with news reports that showed that his own public health officials were already prepared in February to recommend social distancing measures.

That could have slowed the spread of the coronavirus in the United States tremendously.

That delay contributed to the spread of the pandemic.