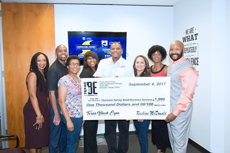 Media mogul Rushion McDonald has traveled the world, seen it all and accomplished it all.

Despite his success producing television shows like “The Jamie Foxx Show” and “Steve Harvey” and new media ventures like his radio show “Money Making Conversations,” McDonald has not forgotten his roots, which include Houston’s Fifth Ward neighborhood, Forest Brook High School and the University of Houston.

So when Hurricane Harvey devastated his hometown of Houston, few were surprised to see McDonald back in town giving financially to those who lost so much two weeks ago due to the horrific flooding.  Through his connections with Jerome Love of the Texas Black Expo (TBE) and Hollywood heavyweights, he was able to spearhead fundraising efforts to help business owners adversely affected by Hurricane Harvey.

“When people think of business owners, they think of Scrooge McDuck swimming in gold coins,” said Jerome Love, president of the Texas Black Expo.  “That’s not the case.  These are human beings who have lost their homes and income.”

Therefore, celebrities like Kym Whitley (“Next Friday”), Wendy Raquel Robinson (“The Game”) and Michael Colyar (“House Party 3”) all gave to help those trying to get their businesses back up and running.

On Sept. 8, the Texas Black Expo and Rushion McDonald gave $10,000 in micro-grants to small business owners, $1,000 for each recipient.

The latest presentation of grants was Texas Black Expo and Rushion McDonald’s second round of micro-grants.  The first round of $10,000 grants was presented on Labor Day.

While the grants will not cover all of the expenses for business owners who lost potential earnings and buildings because of Hurricane Harvey, it is a start in the right direction.

“We just want to help open the door as a start,” Love explained.

However, Love said that the community plays a major role in these businesses getting back on their feet.

The Texas Black Expo president urged Houstonians to use local contractors when considering reconstruction and to support mom-and-pop businesses in the Greater Houston area.

“Supporting small businesses is the most efficient use of capital at a time like this,” Love said.

But seeing international stars like Rushion McDonald playing a role in the recovery effort could lead to the community finding strength in its time of sorrow.