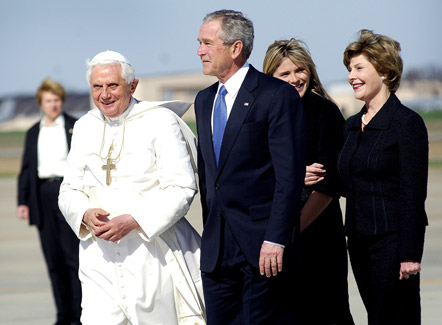 
Heartfelt Reminder of Bygone Era in Politics; Hope For the Future

Although former President Barack Obama’s administration ended a mere four or five years ago, the political landscape has changed drastically in that short period of time.

Back in the day, Republicans and Democrats could duke it out when it came to politics.

But at the end of the day political differences did not end friendships as seen by the mutual respect shared between former First Lady Michelle Obama and former President George W. Bush.

But when asked what he thought about the attention he received for his friendship with the former first lady, Bush admitted, “It shocked me. We got in the car and I think Barbara or Jenna said, ‘Hey, you’re trending!’ The American people were so surprised that Michelle Obama and I could be friends.”

The former president added, “I think it’s a problem that Americans are so polarized in their thinking that they can’t imagine a George W. Bush and Michelle Obama being friends.”

Obama has spoken about her fondness for Bush and the entire Bush family in past interviews with the former president’s daughter, Jenna Bush Hager.

During an interview in December 2019, Bush said that when a person lets their guard down it will “let ourselves become vulnerable,” which allows people to connect despite their differences.

Obama told Bush Hager, “Your dad is someone that, if you take the politics out of it, and I had the opportunity to sit by your father at funerals, the highs, and the lows, and we shared stories about our kids and about our parents. Our values are the same. We disagree…on policy but we don’t disagree on humanity. We don’t disagree about love and compassion. I think that’s true for all of us—it’s just that we get lost in our fear of what’s different.”

Bush said that he bonded with Obama because she understands his sense of humor.

He said that the two of them share a “genuine” friendship.

Over the past week, Bush has spoken out on the current political climate, which is something that he has shied away from since he left the White House in January 2009.

The 43rd President of the United States revealed that he wrote-in his former Secretary of State Condoleezza Rice as his choice for president in 2020, choosing not to vote for former President Donald Trump or current President Joe Biden.

“She knows it,” he said about him choosing Rice as his choice for president. “But she told me she would refuse to accept the office.”

Bush criticized the current incarnation of the Republican Party, labeling the GOP “isolationist, protectionist and to a certain extent nativist.”

As expected, Bush’s criticisms of the current Republican Party received pushback from some of the Party’s leaders.

House Minority Leader Kevin McCarthy (R-Calif.) dismissed the characterization of isolationist, protectionist and nativist by pointing out the diversity of House Republicans, which boasts of many congresspersons of color and many women.

Rep. McCarthy said, “If I look at the last election, the Republican Party in Congress…has elected more women than at any time in the history of the Republican Party. We broadened with the number of minorities as well. So the description that I heard you may say seems quite different than what reality has playing out today.”

McCarthy said that the Republican Party would “always condemn” racism and White supremacy, pointing out his decision to remove Rep. Steve King (R-Iowa) from his committee assignments in 2019 for White supremacist rhetoric.

Bush is advocating for more “compassion” from the Republican Party, and McCarthy would like to meet with the former commander-in-chief “to understand what his feelings are.”

The former president and governor of Texas said, “It’s a beautiful country we have, and yet it’s not beautiful when we condemn and call people names and scare people about immigration. It’s an easy issue to frighten some of the electorate, and I’m trying to have a different voice.”

BusinessInsider.com reported, “While McCarthy cited the House GOP’s growing diversity as evidence to refute Bush’s claims, some of the newly elected Republican women are among the party’s most extreme members.

“Rep. Marjorie Taylor Greene of Georgia has become one of the party’s most controversial figures over her promotion of far-right conspiracies theories, including the QAnon lie, and threats she’s appeared to make against progressive Democrats.”

In a later interview with People Magazine, Bush tried to walk back his comments about the Republican Party being isolationist, nativist and protectionist.

He said, “Really, what I should have said—there’s loud voices who are isolationists, protectionists and nativists, something, by the way, I talked about when I was president.”

Bush continued, “But I painted with too broad a brush…because by saying what I said, it excluded a lot of Republicans who believe we can fix the problem.”

The former POTUS also talked about President Biden’s decision to withdraw all United States troops from Afghanistan by Sept. 11, 2021, saying that the move could embolden the Taliban.

If the Taliban regains strengthen, Bush said it would be devastating to the girls and women of that country.

“My first reaction was, wow, these girls are going to have real trouble with the Taliban,” he said. “A lot of gains have been made, and so I’m deeply concerned about the plight of women and girls in that country…

“All I know is the Taliban, when they had run of the place, they were brutal.”