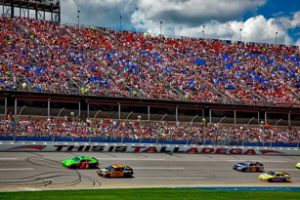 And as a result, Charlotte Hornets owner and Wallace’s 23XI racing team co-owner Michael Jordan has a place in those same history books.

In a statement posted on the team’s Twitter account, the Basketball Hall of Famer said, “I’m so happy for Bubba and our entire 23XI racing team. This is a huge milestone and a historic win for us. From the day we signed him. I knew Bubba had the talent to win and Denny (Hamlin) and I could not be more proud of him. Let’s go!”

The historic win that Jordan spoke of is the fact that Wallace became only the second African-American NASCAR driver, after Wendell Scott, to win NASCAR’s top series.

Scott won the Cup Series in 1963, becoming the first African-American driver to achieve that feat.

After the race in Daytona, Fla. last weekend, Wendell Scott’s grandson Warrick Scott said, “(Bubba’s) someone that I’ve known for quite a while, and we’ve always pulled for him in everything that he does. It’s not easy being him, just as a man. Being similar in age and things of that nature, I can understand a great deal of what he goes through, and for me, it’s wonderful watching him mature and turn into who he’s become and what it means to the African-American community, to me is paramount. I think he’s an emerging legend himself, and I love the way he competes, but also how he shares his passion.”

According to NASCAR.com, “Scott made 495 starts in NASCAR’s top series, recording 20 top-five finishes. His driving days ended in 1973 and he died in 1990 at age 69. He would have celebrated his 100th birthday this year.

“Speedway Park—the half mile dirt track that hosted Scott’s landmark win—is long gone, shuttered in 1973 and later redeveloped. The Madelyn Oaks apartments now sit at the corner of Lenox and Plymouth on Jacksonville’s west side. Scott’s win was the last Cup Series race the track ever hosted.”

To win at Talladega might have special significance after last year’s race when a noose mysteriously appeared in Wallace’s garage.

Investigations concluded that the rope in Wallace’s garage had been there for quite some time and was not a hate crime directed towards Wallace.

Nevertheless, the discovery led to allegations of racism, which eventually led NASCAR to ban the Confederate flag from their races after calls for their ban from people like Wallace.

At the time of the Confederate flag controversy, Wallace said, “No one should feel uncomfortable when they come to a NASCAR race. It starts with Confederate flags. Get them out of here. They have no place for them.”

In June 2020, NASCAR said in a statement, “The presence of the Confederate flag at NASCAR events runs contrary to our commitment to providing a welcoming and inclusive environment for all fans, our competitors and our industry.

“Bringing people together around a love for racing and the community that it creates is what makes our fans and our sport special. The display of the Confederate flag will be prohibited from all NASCAR events and properties.”

After NASCAR announced the Confederate flag ban in 2020, Wallace said, “Bravo. Props to NASCAR and everyone involved…There’s a lot of emotions on the racetrack and off the racetrack that are riding with us. Tonight is something special. Today has been special. Hats off to NASCAR. There’s going to be a lot of angry people that carry those flags proudly but it’s time for change.”

When the noose was discovered in 2020, it led to an outpouring of support from other NASCAR drivers and a discussion about racism at NASCAR races.

However, many thought the incident was a publicity stunt although no evidence exists to support that allegation.

Hamlin knows that the win at Talladega means a lot to Wallace in more ways than one.

He said, “It’s Talladega. It’s his home state. Everything that happened at Talladega last year. Things that Bubba didn’t ask to happen but he had to go through it.”

Additionally, the comparisons of Wallace to Scott go beyond mere physical traits.

The long, hard journey that both racers took to reach paydirt has similarities as well.

Scott’s son Frank Scott said, “Used to get calls all the time, aspiring drivers would say we all want to start in the Cup Series. My father would say, ‘well you gotta cut your roots first.’ And I think Bubba has done that. He started out in the lower divisions and worked his way up, and where he is now is most deserving.”

According to NASCAR.com, “Wallace’s path to a big-league triumph had been foretold by modest national-series success. He notched six Camping World Truck Series wins from 2013-2017. One of those Truck victories came carrying Scott’s longtime car number, driving a retro-themed No. 34 entry at Martinsville Speedway to honor the driver’s selection for the NASCAR Hall of Fame’s Class of 2015.”

Wallace’s 2020 ordeal with the noose in his garage brought new eyeballs to NASCAR.

Wallace gained further respect from many in the African-American community when he wore an “I Can’t Breathe” t-shirt at a NASCAR race after the murder of George Floyd by former Minneapolis police officer Derek Chauvin in 2020.

Now, Wallace has gained the respect that he has most coveted as a NASCAR racing champion.