Black Leaders, Politicians and Celebrities Speak Out Against Russian Invasion of Ukraine 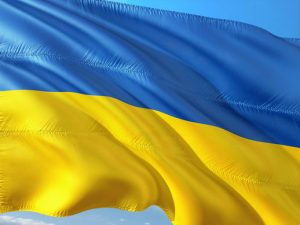 Ukrainian soldiers and civilians have fought valiantly against the unprovoked Russian invasion.

On Feb. 23, many Americans went to sleep with the knowledge that the European continent faced the biggest military crisis since World War II, thanks to Russian dictator Vladimir Putin invading neighboring country Ukraine.

The unprovoked move resulted in quick criticism from world leaders around the globe and has led to protests in Russia because many Russians disapprove of Putin’s violent decision.

Many leaders, politicians and celebrities from the Black community took to social and mainstream media to express their concerns, solidarity and prayers for the people of Ukraine.

RegalMag.com composed a list of comments from some of the most influential Black Americans from Twitter, press releases and more, who chose to use their platform and influence to speak out against a dictator and speak up for democracy.

Rev. Bernice King—“I’m praying for the people of Ukraine and throughout the world who are in the path of terror and tyranny. And I appeal to leaders across the globe to make every effort to render war obsolete…

“As we pray for Ukraine and the world, check on those around you. Check on you. These were already tumultuous and traumatizing times, with many struggling with anxiety and depression. And there were already humans facing grave inhumanity and militarism.”

Actor Wendell Pierce—“In Budapest, I’m only 200 miles from Ukraine. America is so vast, we forget how much smaller Europe is. Because of the close proximity, the fear of the spread of the war is tangible. Lviv Ukraine from Budapest is the distance between New Orleans and Atlanta. NATO is the deterrent…During the coarse (sic) of the day, I discussed evacuation plans for a colleague’s family. In Kyiv. Money, foods, housing have all become issues of concern. While they are concentrating on getting out, they don’t know if they are successful if they will get back. Personal life crisis…War is a life ending and life changing event. We forget war is also constant. An ugly part of humanity. Just last month this happened in a coup in Burkina Fasso (sic), on January 23, just 4 weeks ago. Where was the attention of the world then. We, humanity, are fallible & violent”

Former Congressman Will Hurd (R-Texas)—“Vladimir Putin’s number one goal is to stay in power until he dies. He also wants to right what he perceives as the wrongs done by ‘the West’ by recreating the old USSR. The world needs to put the most draconian financial pressure on Putin’s allies to create the same preconditions inside Russia that created… ‘the color revolutions’ which led to independence movements in Eastern Europe and Central Asia. World leaders need to start making better cases to their public about the need to be tough with tough guys.”

Sen. Tim Scott (R-S.C.)—“My heart and prayers are with the people of Ukraine during this devastating and unprovoked attack by Putin. America continues to stand with you.”

Rep. Val Demings (D-Fla.)—“I previously led efforts with Democrats and Republicans in Congress to investigate Vladimir Putin’s personal financial networks. We should utilize the information we gained and implement staggering personal sanctions against his own assets.”

Former President Barack Obama—“Last night, Russia launched a brazen attack on the people of Ukraine, in violation of international law and basic principles of human decency. Russia did so not because Ukraine posed a threat to Russia, but because the people of Ukraine chose a path of sovereignty, self-determination, and democracy. For exercising their rights that should be available to all people and nations, Ukrainians now face a brutal onslaught that is killing innocents and displacing untold numbers of men, women, and children.

“The consequences of Russia’s reckless actions extend beyond Ukraine’s borders. This illegal invasion in the heart of Europe also threatens the foundation of the international order and security. For some time now, we have seen the forces of division and authoritarianism make headway around the world, mounting an assault on the ideals of democracy, rule of law, equality, individual liberty, freedom of expression and worship, and self-determination. Russia’s invasion of Ukraine shows where these dangerous trends can lead—and why they cannot be left unchanged.”

Media personality/political pundit Armstrong Williams—“President Biden’s response? Sanctions. America has chosen to bring sticks and stones to a gun fight. Ask yourself: why did Putin chose (sic) to invade Ukraine now? Surely Russia had the ability to invade for years.”

Rep. Joyce Beatty (D-Ohio)—“Putin’s premeditated actions have already brought catastrophe to the people of Ukraine. We know full well Russia is responsible for the death and destruction this war will bring. I stand with @POTUS Biden and our international allies in support of Ukraine. Russia will pay dearly for the unprovoked violence.”

Former RNC Chairman Michael Steele—Our Allies—particularly Germany and Italy—are nervous about kicking Russia out of SWIFT. But to do otherwise is a missed opportunity to bring real pain to Putin for his aggression. #Changethegame.”

DNC Chair Jaime Harrison—“I was a kid when Pres. Reagan demanded ‘Mr. Gorbachev tear down this wall.’ 35 years later, a Fmr GOP President & his acolytes are now praising a Russian dictator’s attempt to rebuild the USSR & a new ‘wall’ in Europe! It’s time to choose—Right or Wrong America or Putin #America”

Vice President Kamala Harris—“We know and believe that this is a war of choice. It is unprovoked. It is unwarranted. And it is unjustified. As the president made clear from the beginning, if Russia were to take aggressive action against Ukraine our response would be swift and certain and that is exactly what occurred…The effect will be immediate on Russia and we will continue as we have since the very beginning to work with our allies and our partners around the world. We are unified in our position on this and in our reaction to this unjustified, unprovoked attack on a sovereign nation.”