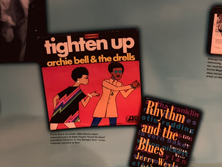 When many people think about Texas music, they often think about country music and hip-hop music.

From Willie Nelson to Travis Scott and Megan thee Stallion, the great state of Texas proves that everything is bigger in the Lone Star State, even music.

But do not get it twisted; from H-Town to the DFW to Waco, them Texas boys and girls have consistently laid down some of the best soul music over the past five decades.

Therefore, to commemorate the greatness that is Texas R&B music, RegalMag.com profiles the best rhythm and blues songs to come from the T.X.

Per usual RegalMag.com rules, an artist can only have one song on the list.

“And I Am Telling You I’m Not Going” by Jennifer Holliday—People forget that Houstonians ran the original play “Dreamgirls” with Holliday and Acres Homes’ own, Loretta Devine. Singing “And I Am Telling You…” on Broadway made Holliday a legend and made all other attempts at covering the song pale in comparison.

“Very Special” by Debra Laws—Houstonian Debra Laws came from a musical family as her brother Ronnie Laws played saxophone and flute for Earth, Wind & Fire and Hugh Masekela. Therefore, when the duet “Very Special” came to the table, the family did not have to leave the house to create a classic. On the 1981 classic, Debra sang lead with call-and-response vocals provided by her brother, Ronnie Laws.

“Single Ladies (Put a Ring On It)” by Beyoncé—Honestly, Beyoncé could have had the entire article to herself, especially with her work with Destiny’s Child included. The Third Ward (Houston) representative has made a career out of anthems for strong women. But possibly none has been more powerful and popular than “Single Ladies.” The song said it simply, if you liked it, then you shoulda put a ring on it.

“Tyrone” by Erykah Badu—Speaking about anthems for the ladies, Erykah Badu created an anthem for the ages in 1997 with “Tyrone.” The Dallas native made it known she had no time for loser men who could not get their acts together. The former Grambling State University student said she was fed up with paying her man’s way, his homeboy’s way and sometimes his cousin’s way.

“Knockin’ Da Boots” by H-Town—If a person listened to urban radio in 1993, then “Knockin’ Da Boots” by H-Town became unavoidable. That song shot all the way to number one with a bullet and changed the image of Houston music in the early 1990s, and changed the image of Miami’s Luke Records in the process. At the time, urban Houston music meant the Geto Boys and other artists signed to Rap-a-Lot Records. And Uncle Luke meant booty music and 2 Live Crew. H-Town changed all of that completely with the sexy single, “Knockin’ Da Boots.”

“I Can’t Wait Another Minute” by H-Five—One of the most tragic stories in R&B history is the heartbreaking story of Waco, Texas’ own, Hi-Five. Death, injuries and murders ruined their career but for a brief moment in the 1990s, it looked like Hi-Five would become one of the best R&B groups ever. While the teenagers signed to Jive Records had their bubblegum soul records like “I Like The Way (Kissing Game),” they showed their maturity and vocal ability with the classic “I Can’t Wait Another Minute.” With Tony Thompson and Toriano Easely (originally from Oklahoma City, Okla.) singing lead vocals, the sky should have been the limit for Hi-Five.

“Bills, Bills, Bills” by Destiny’s Child—Men hated this song when it dropped in 2000. However, women had another male-bashing anthem with “Bills, Bills, Bills” off of Destiny Child’s sophomore album. They asked, can a man pay their bills? They answered for him; I don’t think you do, so you and me are through. Unfortunately, after this album, the original lineup was through with LeToya Luckett and LaTavia Roberson getting the boot.

“Truth Hurts” by Lizzo—Houstonian Lizzo might hold the distinction of Houston’s second biggest pop star ever, next to Beyoncé. She raps. She sings. She has a little Lauryn Hill in her, but more pop. She has a little Missy Elliot in her but with more overt sex appeal. In “Truth Hurts” she lets a man known that she will never ever be his side chick. Furthermore, she is happy that her ex has gone back to his woman because he never had Lizzo’s heart in the first place. Outside of making hit records, Lizzo has changed the way the world looks at body positivity. Hollywood sometimes thinks women have to wear a size zero to wear tight clothes and bikinis. Lizzo will have zero of that nonsense.